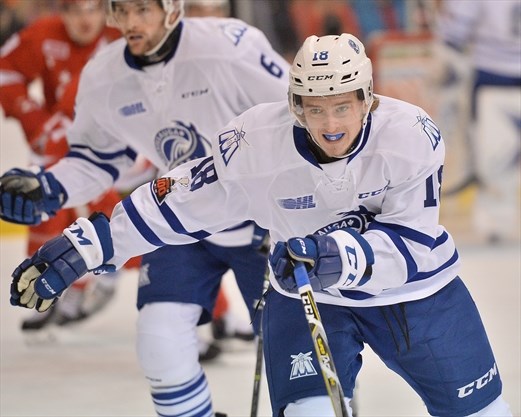 Cole Carter couldn’t be happier with his new role on the Mississauga Steelheads.

Now in his overage season in the Ontario Hockey League, Carter has been appointed team captain and is tasked with helping many young rookies develop.

“We’ve got a lot of good leaders here and to be named captain is extremely flattering,” said Carter, who has been with the Steelheads since he was acquired in a trade with the Kitchener Rangers in January. “It’s such an amazing league and to be named leader of a team, I’m speechless.”

Carter, the sixth captain in Steelheads history, will guide a team that has lost a lot of leaders over the off-season, including former captain Michael McLeod, Nic Hague and Jacob Moverare, all of whom are moving on to the professional ranks.

As well, Ryan McLeod, an assistant captain last year, is still at training camp with the Edmonton Oilers while Owen Tippett was sent back to the Steelheads from the Florida Panthers on Monday, Sept. 24.

Richmond believes Carter and newly appointed assistant captain Nicholas Canade have the right attitude to lead the Steelheads right away.

“(Carter) does it the right way on the ice and off the ice,” Richmond said. “He works tremendously hard during the game and in practice, he always wants to get better. That’s what we want our young guys to see.”

Last season, Carter had 23 points, including 15 goals, in 28 games with the Steelheads to go along with five points in six playoff games.

Carter realizes a lot of teams around the league may underestimate the Steelheads because they have so many rookies, such as Filip Reisnecker, James Hardie and William Portokalis.

However, Carter has been telling the youngsters not to be afraid to make mistakes since they can learn from them. That was evident on Sunday, Sept. 23, when the Steelheads fell behind 6-1 to the Niagara IceDogs and battled back in an 8-6 loss.

“I’m trying to tell them to be confident,” Carter said. “There’s no need not to be. We’re trying to create a real positive atmosphere and I think that’s why the young guys are really bringing it.”