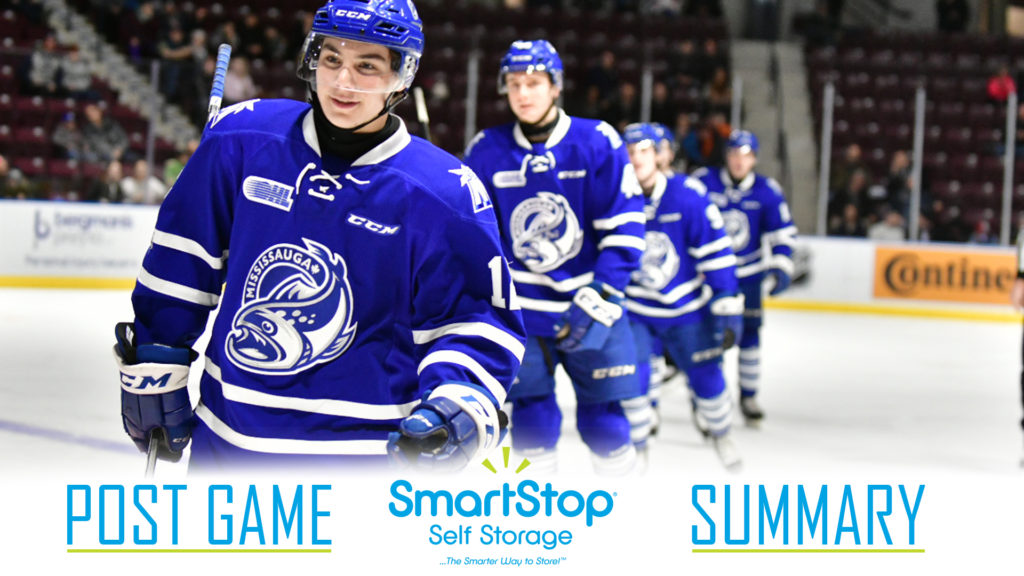 With wins in their last two games, the Steelheads looked to keep that momentum going in this weekend’s road trip to Michigan, starting with tonight’s match up against the Saginaw Spirit. The Steelheads were coming off a 5-2 win over the Kingston Frontenacs while the Spirit were looking to bounce back after an 8-2 loss at the hands of the Ottawa 67’s.

The Steelheads came out firing in the opening minutes, looking to notch the opening goal and jump out to an early lead. Unfortunately it would be the home team that struck first as DJ Busdeker opened the scoring at 5:26. Brady Gilmour and Bode Wilde assisted on Busdeker’s fourth of the season. Just past the halfway mark of the frame, the Steelheads would see their first power play opportunity of the night as Danny Katic was booked for cross-checking. A minute into the man-advantage, Owen Tippett took a slashing penalty, resulting in 4-on-4 action. The penalties expired and the game returned to even strength. At 15:49, the Spirit would have their opportunity on the man-advantage as defenceman, Ryan Wells was sent off for slashing. The Spirit were unable to capitalize and the game returned to even strength once again. Late in the frame the Steelheads were able to convert on a great play as Ryan McLeod fed a pass from behind Saginaw’s net to Nicholas Canade, who made no mistake beating Prosvetov blocker side. Cole Carter picked up the extra assist on Canade’s second of the season as the game sat tied at 1-1 after 20 minutes of play.

The Spirit restored their lead in the early minutes of the middle frame as Ryan Stepien beat Ingham with his first of the season from Albert Michnac and Aidan Prueter. The rest of the period featured some solid back and forth hockey with no penalties on either end, and the score remained 2-1 heading into the final frame.

Things began to get out of reach for the Steelheads in the third as the Spirit scored on a power play and then added a shorthanded goal minutes later to extend their lead to 4-1. The power play goal came from Cole Coskey at 9:25 who grabbed the puck off a Spirit faceoff win and beat Ingham to put the home team up 3-1. Blade Jenkins assisted on Coskey’s eighth of the season. Minutes later with the Steelheads on a power play, a tough bounce off Reagan O’Grady’s skate put the Steelheads down by three. In the final minutes of play the Spirit added to their lead as Blade Jenkins beat Ingham on a 2-on-1 to seal a 5-1 win for Saginaw.

The Steelheads will look to bounce back tomorrow in Flint as they visit the Firebirds for a 7:00 PM start.