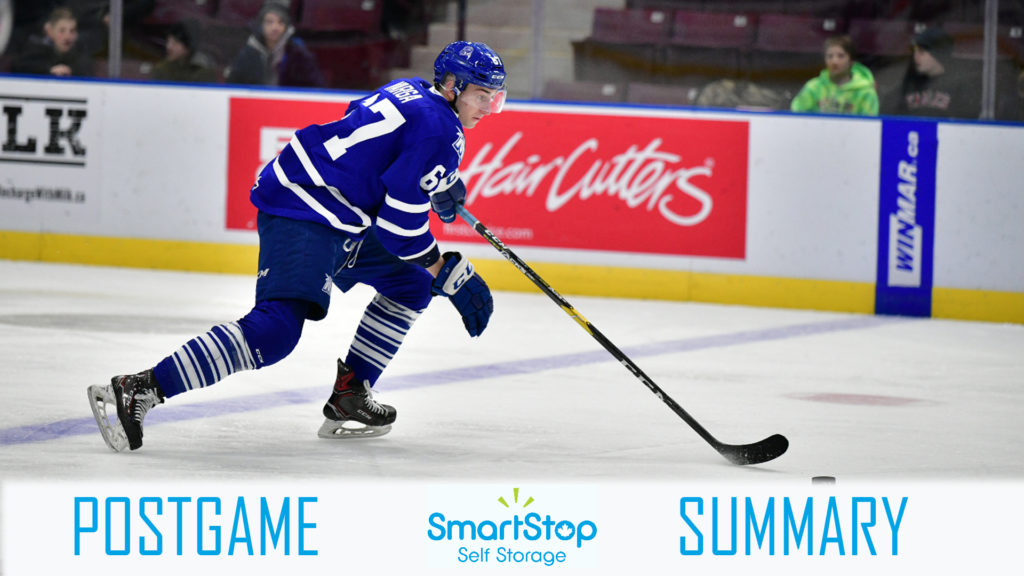 Ottawa, ON – The Mississauga Steelheads traveled to the Nation’s Capital to take on the Ottawa 67’s on Friday night.

The Steelheads opened the scoring with Ottawa in the box for high-sticking, as Liam Ham found James Hardie in front of the net who roofed a backhander past Cedrick Andree. Ottawa would get one back as an odd-man rush led to a goal for Graeme Clark. Mississauga would head to the powerplay just before the end of the period, as Merrick Rippon was called for boarding for a hit on Cal Christner.

The Fish had a great scoring chance to start the second period, as Hardie skated in on a breakaway but was stopped by the right pad of Andree. It was Ottawa who eventually opened the scoring in the frame, as Mitchell Hoelscher found the back of the net for his fifth goal of the season. With Cole Schwindt in the box for interference, Graeme Clark fired a shot just past the glove of Edmonds to extend the lead for the 67’s. Mississauga had 15 shots on goal in the period, but trailed Ottawa 3-1 heading into the second intermission.

The 67’s capitalized on a Steelheads tripping penalty to start the third period, as a Kevin Bahl slapshot squeaked through the arm of Edmonds. Ottawa would add a few more before the end of the game, as Teddy Sawyer registered the first of his career and Alec Belanger wired a hard slapshot from the blue line to make the score a final of 6-1. 2020 NHL Draft eligible prospect James Hardie extended his goal scoring streak to three games in the contest, while Thomas Harley registered an assist to extend his point streak to five.

The Mississauga Steelheads will return to the Paramount Fine Foods Centre on Sunday to take on Quinton Byfield and the Sudbury Wolves.Tickets and Family Pack’s to Sunday’s game can be purchased by visiting the Box Office, online through ticketmaster.ca or by calling 905-502-9100.