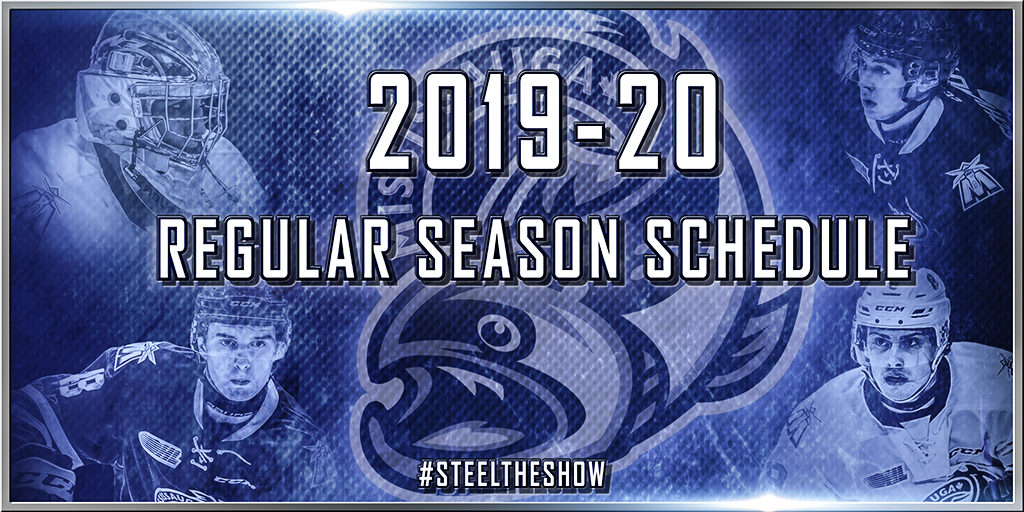 MISSISSAUGA, ON – In conjunction with the Ontario Hockey League, the Mississauga Steelheads announced today the complete 2019-20 regular season schedule. The Steelheads will open their season at the Paramount Fine Foods Centre on Friday September 20th at 7:00 pm, as they play host to the Niagara IceDogs. The opener will also mark the first of seven of nine games at home including a three-game home stand to begin the campaign. The full schedule can be seen here – SCHEDULE.

Divisional alignment remains the same for 2019-20 with the same 68-game unbalanced schedule. Teams continue to play out of conference opponents a minimum of two times (one home, one away) while the majority of teams play interconference teams a minimum of four times including two games at home and two on the road. Interdivisional teams will play each other up to six times and in a number of cases, closest rivals will play each other up to eight times.

Marquee home games to mark in your calendars are December 8th vs. Soo Greyhounds (Teddy Bear Toss) and February 17th vs Erie Otters (Family Day Game). For the fourth straight year, the Steelheads will host two school day games. The first will be on Wednesday November 27th at 11 am against the reigning OHL champions, Guelph Storm and the second will be held on Thursday March 5th at 11 am vs. the Saginaw Spirit.

The Steelheads will close out their regular season schedule against the 2019 Bobby Orr Trophy winners, the Ottawa 67’s on Sunday March 22nd at 2:00 pm. The top eight teams from each conference will qualify for the 2020 OHL playoffs with the division leaders ranked one-two in each Conference

Further details, including ticket presale and on-sale dates, special theme nights, broadcast information and the team’s training camp schedule will be released at a later date. Steelheads 2019-20 Finatics Memberships start as low as $14.25 per seat and some of the main benefits include access to exclusive events, 35% off single game tickets, 20% concessions and bait shop, access to the ticket exchange program and more. Visit http://mississaugasteelheads.com/season_tickets to become a member.

For single game tickets, fans are encouraged to register to become a Finsider for ticket presale access and to stay up to date with all the Steelheads ticketing and team news.