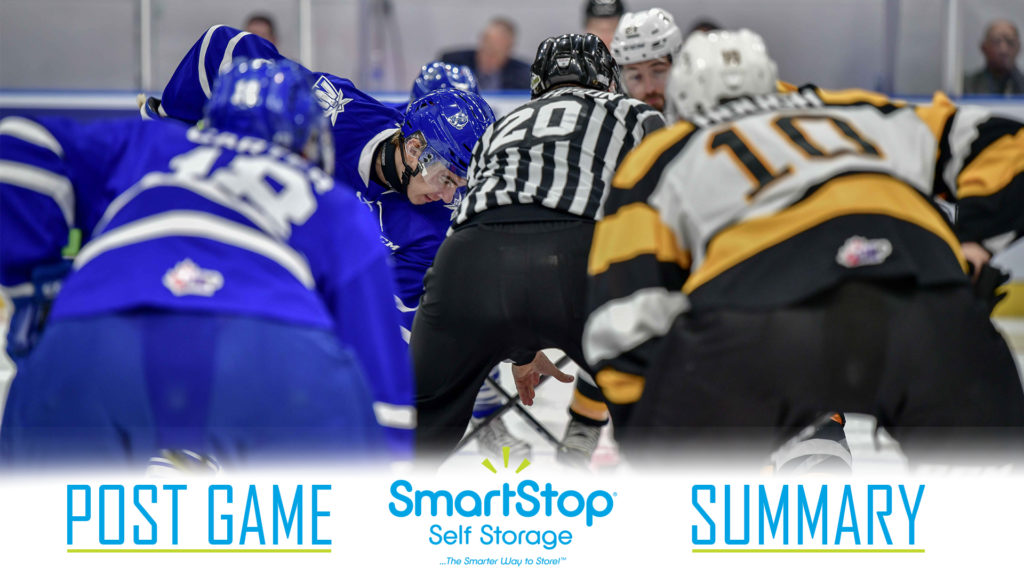 With wins in their previous two games, the Mississauga Steelheads looked to extend their win streak to three when they visited the Kingston Frontenacs on Friday. Although the Frontenacs (6-15-1-0) have had a tough start to the season, they came into tonight’s game riding the high of a 5-1 win over the Oshawa Generals. The Steelheads topped Kingston 5-2 and 4-1 in their previous two meetings, giving them a 2-0 series lead over the Fronts this season.

Owen Tippett got things started in the first, notching the opening goal at 7:37. Alan Lyszczarczyk and Cal Christner assisted on Tippett’s 13th of the season, and his third in as many games. The Steelheads controlled the pace of play in the opening frame, outshooting the Fronts 17-4. The score remained 1-0 heading into the first intermission.

The second period resembled the first, with Owen Tippett adding another early goal to put the Steelheads up 2-0. Richard Whittaker and Lyszczarczyk assisted on what would be the eventual game winner. Tempers started to flare as the game approached the half way mark. Steelheads defenceman Ryan Wells received a two-minute instigator, a five-minute fighting major and a 10-minute misconduct for fighting and Kingston’s Jacob Paquette also received a five-minute major. At 10:10, Kingston’s Matt Hotchkiss was sent off for interference, giving the Steelheads an opportunity on the man-advantage. At 11:16, Ryan Barbosa capitalized on the power play, extending their lead to 3-0. Thomas Harley assisted on Barbosa’s second of the season. Minutes later, Barbosa found the back of the net again to put the Steelheads up 4-0. Tippett and Whittaker assisted on the goal and the Steelheads held a comfortable lead heading into the final frame.

A Steelheads’ penalty late in the second allowed the Frontenacs to start the third on the man-advantage. 25 seconds into the frame, Kingston’s leading scorer Jason Robertson beat Jacob Ingham to get he home team on the board. Jakob Brahaney and Anthony Aguanno assisted on Robertson’s 23rd of the season. At 7:59, the Steelheads restored their four-goal lead as Lyszczarczyk buried his ninth of the season. Whittaker assisted on the goal, his third assist of the night.

Owen Tippett (2 goals, 1 assist), Alan Lyszczarczyk (1 goal, 2 assists) and Richard Whittaker (3 assists, +4) each picked up three points in the 5-1 win over the Fronts, while defenceman Ryan Barbosa added two goals. With his goal tonight, Alan Lyszczarczyk is on a three-game point streak and has recorded 12 points in his last six games. The Steelheads return home Sunday to host the Sudbury Wolves for a central division tilt at the Paramount Fine Foods Centre. Puck drops at 2PM.