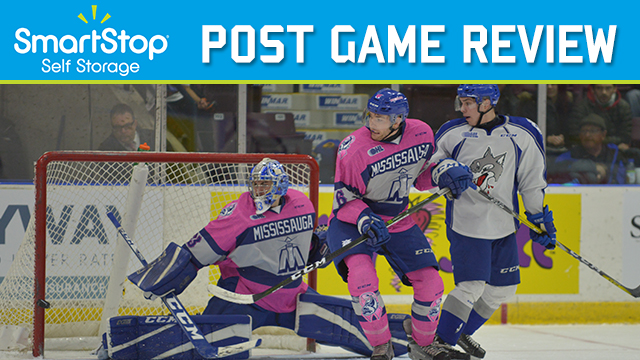 The Mississauga Steelheads had closed out a 3-in-3 Sunday afternoon with a 3-1 win over the Sudbury Wolves, picking up five of a possible six points. Following today’s win, the Steelheads (20-17-6-5) sit atop the central division standings, seven points above the Wolves (19-22-6-0).

Things got off to a quick start as Mikey McLeod netted his 12th of the season just 52 seconds into the game. Brendan Harrogate and Shaw Boomhower assisted on the opening goal. Liam Dunda evened the score at the seven-minute mark. His sixth of the season was unassisted. The Steelheads outshot the Wolves 11-7 as the game sat tied at 1-1 after the first 20 minutes of play

The Steelheads struck early again in the second as Jacob Cascagnette fired a shot that trickled through MacKenzie Savard to restore their one-goal lead. Mikey McLeod picked up the lone assist on Cascagnette’s 11th of the season, and eventual game winner. Mississauga held a 2-1 lead after 40 minutes of play and continued to outshoot their opponent, 16-10 this period.

It was an exciting third period as each team had their fair share of chances. The Steelheads had an opportunity to extend their lead as Chandler Yakimowicz was handed a five-minute major and game misconduct for kneeing. There were some close chances but the Trout were unable to capitalize on the man-advantage. With time winding down in the final frame and Sudbury down by one, the Wolves pulled Savard in favour of an extra-attacker. The Steelheads gained control of the puck as Michael McLeod made a selfless play, feeding Spencer Watson a pass in front of Sudbury’s empty net, where he made no mistake in sealing a victory for Mississauga.

The Steelheads will travel to Niagara on Thursday before returning home next Friday, February 3rd to host the North Bay Battalion at home for a 7:00pm start.