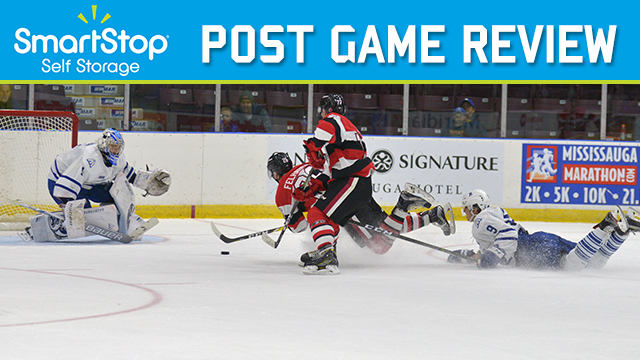 Following a 5-4 loss to the Generals on Friday, the Mississauga Steelheads returned to action on Sunday to host the Ottawa 67’s hoping to bounce back and close out the weekend on a positive note. The Steelheads started the opening period strong, netting an early goal at 4:27. Off an assist from Michael McLeod and Owen Tippett, Stefan LeBlanc scored his second of the season to open it up for Mississauga. The Trout continued to dominate the 67’s, claiming eight shots to none, within the first eight minutes of play. Steelheads goal tender, Jacob Ingham, saw his first on-target shot at the 12-minute mark, but was able to clear it easily. Aidan McFarland, Nathan Bastian, Jacob Moverare, Marcus Dickerson and Tippett would all have excellent chances, but were unable to get them past Oshawa’s tender Leo Lazarev. Shots on goal for the first, fell 14-4 in favour of Mississauga.

In the second, it was Ottawa’s turn to start the period strong, as they fired one past Ingham at 2:10. Jared Steege claimed his third of the season, assisted by William Brown and Drake Rymsha. The Steelheads were able to recover the lead momentarily as Damian Bourne sailed one past Lazarev for his third of the season. Bourne’s goal came at 6:55 and was assisted by Ryan McLeod and Jacob Moverare. The majority of the action in the middle of the frame came from Shaw Boomhower. Living up to his name, Boomhower made some huge hits and became a big thorn in the sides of the 67’s. Despite a great effort by Ingham, Ottawa managed to tie it back up at 15:01, off a shot from Tye Felhaber, assisted by Chase Campbell.  This was Felhaber’s first 67’s goal. At 17:58, Brendan Harrogate conceded a slashing penalty that gave the 67’s the man-advantage in the last two minutes of play. Ingham was able to make some great saves, but as the clock ran out in the penalty, Ottawa scored at 0:06. Kyle Auger netted his first of the season, assisted by Drake Rymsha and Tye Felhaber

The final frame saw both teams passing well and taking multiple shots that just could not get past either goaltender. The tying goal would come from Nathan Bastian, as he claimed his seventh of the season at 07:19, unassisted. A bad turnover from the usually rock-solid Moverare, would allow Jared Steege to pull ahead off a short-handed goal. Steege’s second of the game would come in at 17:22, assisted by Patrick White. But the Hershey Centre erupted 11 seconds later as Brendan Harrogate would tie it up unassisted. That goal would do it for the third, and regulation wasn’t enough to decide the game.

In 3-on-3 overtime, the Steelheads conceded an early penalty on Tye Felhaber that resulted in a penalty shot. He took his time, but Ingham was able to keep up with him and kept Mississauga in the game a little bit longer. Patrick White would end up winning the game for Ottawa as he went top shelf on Ingham at 4:14, assisted by Artur Tyanulin. Steelheads would come away with a point, but lost their second of two weekend games at home.

The Steelheads will return to action on Wednesday, November 16 at 11:00am against the Oshawa Generals. The Trout will be fighting hard for the win, after Friday night’s 5-3 loss against the Gens. Be sure to follow us on Twitter, Facebook, and Instagram to stay up to date with all things Steelheads.