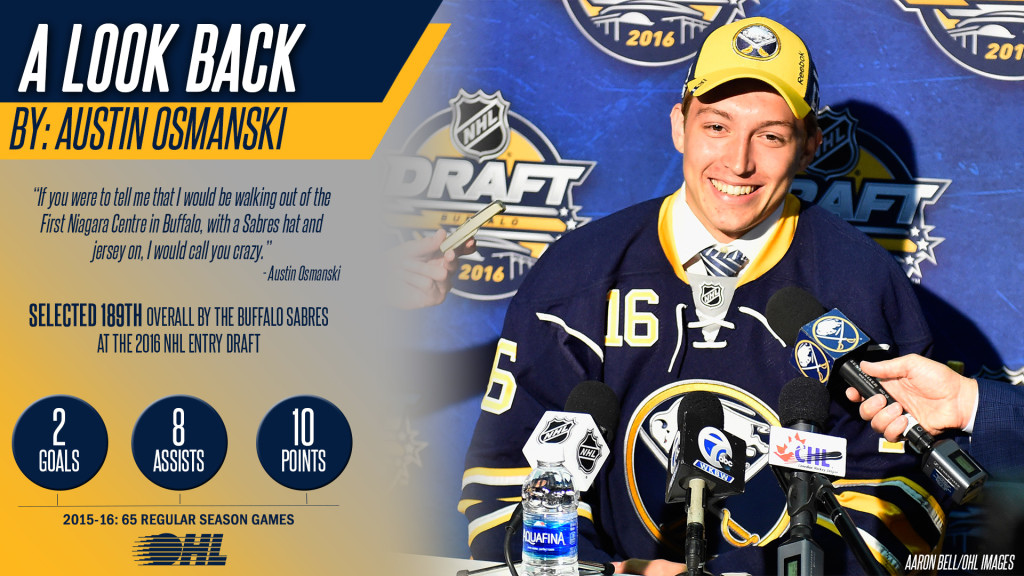 If you were to tell me that I would be walking out of the First Niagara Center in Buffalo, with a Sabres hat and jersey on, I would call you crazy. The time went on and on as other picks kept going past me, but I stayed there until 189 came around, knowing Buffalo had two picks left. I had over 40 supporters in my section, 105, from parents, grandparents, brothers, uncles, aunts and cousins, to old teammates and family friends, all together in the building where we grew up watching the Sabres play.

When it came to Buffalo’s first pick in the final round, I closed my eyes and the announcer said “Buffalo, go ahead”. We heard “Buffalo selects from Mississauga” and I felt my mom look at me as they paused. I told her “hold on mom, still might not be us,” until we heard “Buffalo native” and then I immediately felt every one of my muscles lose tension and the weight lift off my shoulders as I heard all my 40+ supporters scream and stand up. I never actually heard them say “Austin Osmanski,” but we knew it was us. Instantly my mom wrapped me into her arms, and my dad piled on too. I then turned around and hugged one of my next biggest influences, my 28-year-old uncle Eric, who was sitting next to me. After that I went around to all of the others in my section; family, billet family, friends and family friends. It probably took me five whole minutes to get down to the table, but I had to make sure everyone was attended to.

My two friends from my school in East Aurora were my guides for the media and my family so that was pretty funny as I went down to table to meet the Sabres personnel. I remember GM Tim Murray told me, “you know what this means right? No holiday for you!” He was talking about the 4th of July because development camp started at my home rink, the Harborcenter, on the 5th and carried on until the 12th. I had no complaints and no issue with that. I will never forget stretching the hat over my head and feeling the perfectly snug fit. I couldn’t tell you if I ever stopped smiling until waking up the next morning, but I was told I didn’t.

All the media was a blur and everything happened so fast with the pictures and photo shoot and press conference. There were more bright lights and cameras then I have ever seen at one time; all of them pointing at the local boy whose dream of getting picked by the local team was fulfilled. Going on Buffalo Sports Radio after it all and hearing that my childhood idol, Patrick Kaleta, tweeted at me was one of those “WHAT?!” moments of the night. It all was going for me that night and when I met back up with my family before going to the suite party, my little brothers were sitting there eating chicken fingers and fries since they sat there with everyone for a very, very long time.

Meeting all the other draft picks and the entire Sabres staff, as well as Terry and Kim Pegula – the owners of the Buffalo Sabres, was pretty surreal as they have basically monopolized this city since they stepped in a few years ago and revamped the city pride and Canalside district. We then opened up the party to others who couldn’t make it to the draft at Buffalo Riverworks right down the street and there were even more pictures. Seeing those I haven’t seen in a while and having their support on my big day was heart warming and made the day and weekend that much more memorable.

The next morning I graduated from East Aurora High School where I spent grades 7-11. They gave me a shout out during the opening ceremony which was pretty cool since East Aurora isn’t a hockey town by any means. The whole weekend and weeks after still haven’t worn off and draft day in Buffalo is something I will never forget. It was one crazy story, but now it’s time to get back to work and make the real dream happen!