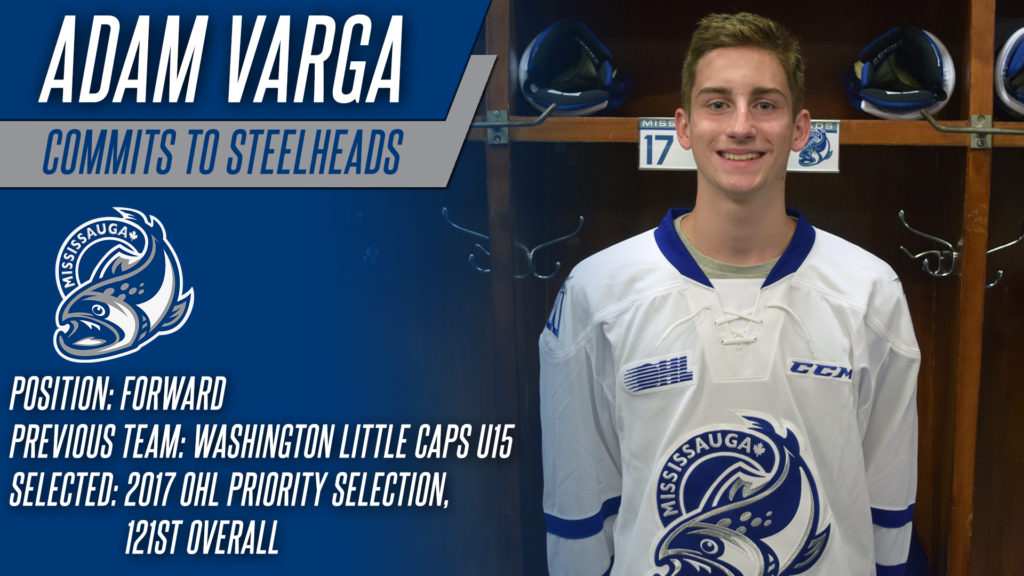 The Mississauga Steelheads are pleased to announce the commitment of forward, Adam Varga. Varga, a product of the Washington Little Capitals, was selected by the Steelheads in the seventh round (121st overall) of the 2017 OHL Priority Selection.

During the 2016-17 season, Varga split time between the Atlantic Youth Hockey League (AYHL) and the North American Prospects Hockey League (NAPHL). The Bel Air, Maryland native had 41 points (18 goals and 23 assists) in 28 games in the AYHL, and 32 points (23 goals and 9 assists) in 16 games in the NAPHL. He added 16 points (11 goals and five assists) in six playoff games, leading the U15 Little Capitals to a NAPHL Dixon Cup Championship. Following a successful inaugural season of the 15U Division, Varga was named to the All-NAPHL 15U First All-Star Team.

“We are thrilled that Adam has committed and will be joining our Steelheads family,” said Steelheads’ general manager, and head coach, James Richmond. “Adam is an elite player who had an impressive season with the Little Capitals. He has continued to impress in the first few days of training camp, and we look forward to seeing him in a Steelheads jersey this season.”

The Steelheads would like to welcome Adam and the Varga family to the organization.

Fans will have the opportunity to see Varga and the rest of the Steelheads at our two home exhibition games on Saturday, September 2nd (Hershey Centre Rink #2) at 7:00 PM and on Wednesday, September 13th (Westwood Arena) at 7:00 PM.