Attack come back from 2-0 deficit 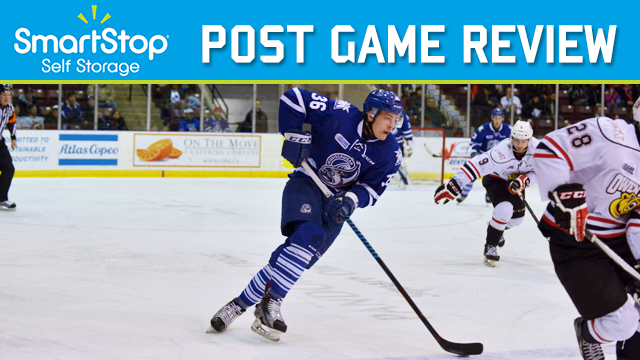 The Mississauga Steelheads travelled to Owen Sound tonight for a cross-conference matchup against the Attack. The Steelheads came into tonight’s game looking to snap a five-game losing streak, while the Attack were coming off back-to-back wins over London and Kitchener in their previous two games. Despite jumping out to a two-goal lead in the first period, the Steelheads continued to struggle as the Attack came back from a 2-0 deficit to win 5-3.

Michael McNiven and Matthew Mancina were the starting goalies, each making their second start in as many nights. Michael McLeod opened the scoring jut before the midway point of the first period following a strong individual effort where drove the net and stuffed a backhander between the legs of McNiven. Ryan McLeod and Nathan Bastian assisted on McLeod’s fifth of the season. Aidan McFarland doubled the Steelheads’ lead with a shorthanded breakaway goal at 15:03, his sixth of the season, to give Mississauga a two-goal cushion heading into the first intermission.

The Attack turned things around in the middle frame, scoring three unanswered goals to take the lead. The first came after Matthew Struthers stripped Mississauga of the puck and fired a shot past Mancina at 7:04 of the second. The line of Aidan Dudas, Jonah Gadjovich and Matthew Struthers continued to pressure and were successful again at 15:14 as Struthers set up Gadjovich who made no mistake going top corner to even the score 2-2. Nick Suzuki would add a shorthanded goal following a breakaway feed from Gadjovich to give the Attack a 3-2 lead after 40 minutes of play.

Owen Sound quickly turned their one-goal lead into a two-goal advantage early in the final frame, capitalizing on the man-advantage. Jacob Friend added the Attack’s fourth goal and eventual game winner from Matt Schmalz and Ethan Szypula. With time winding down in the period, the Steelheads would pull Mancina in favour of an extra-attacker. The last minute push paid off as Brendan Harrogate pulled the Steelheads within one with 58 seconds to play in the game. Unfortunately they couldn’t complete the comeback as the Attack added an empty net goal from Kevin Hancock to seal a 5-3 win.

The Steelheads will travel over the border on Tuesday to take on the Erie Otters in a 7PM start.