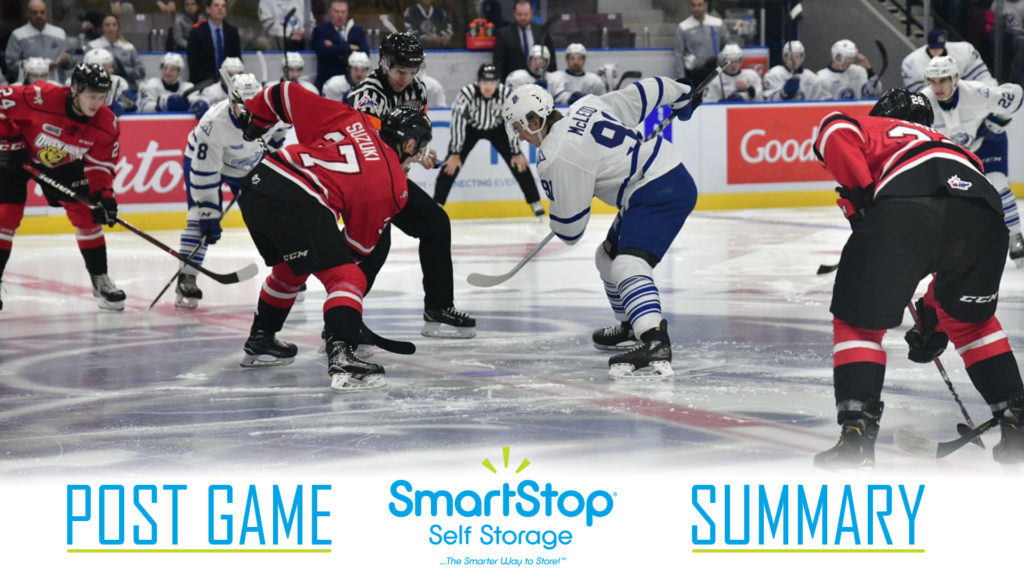 Coming off a 3-1 loss to the Ottawa 67’s on Sunday, the Steelheads returned to action Friday night to host the Owen Sound Attack in a cross-conference match-up. The Attack came in riding a two-game win streak, most recently topping the Guelph Storm 5-2.

Owen Tippett got things started early, netting his sixth of the season just 1:12 into the opening frame. Keean Washkurak and Ryan Barbosa assisted on the goal as the Steelheads jumped out to an early 1-0 lead. The Attack were quick to respond, scoring just 25 seconds later to even the score 1-1. That goal came from Mississauga native, Kevin Hancock. Aidan Dudas and Daylon Groulx assisted on his 10th of the season. Two minutes later, that same line converted again as Groulx gave the Attack their first lead of the night. Dudas and Hancock assisted on Groulx’s fourth of the season. The Steelheads trailed the Attack 2-1 after 20 minutes of play.

1:12 into the middle frame, Owen Sounds’ Groulx would sit for two on a tripping call, giving the Steelheads an early opportunity on the power play. The Steelheads took advantage as Captain Cole Carter put home his 12th of the season to even the score 2-2. Owen Tippett assisted on the goal. Again, the Attack responded quickly and restored their lead as Maksim Sushko beat Ingham with his third of the season to bring the score to 3-2. The Attack then added back-to-back goals from Nick Suzuki and Griffin Wilson, giving them a comfortable three-goal cushion. Late in the frame, Richard Whittaker cut the deficit with his third of the season and the Steelheads would head into the final frame down 5-3.

Each team exchanged their fair share of opportunities in the final frame, but the goalies were the story of the third as the score stayed locked at 5-3. The Steelheads will look to bounce back on Sunday as they visit the Erie Otters for a 4PM start.