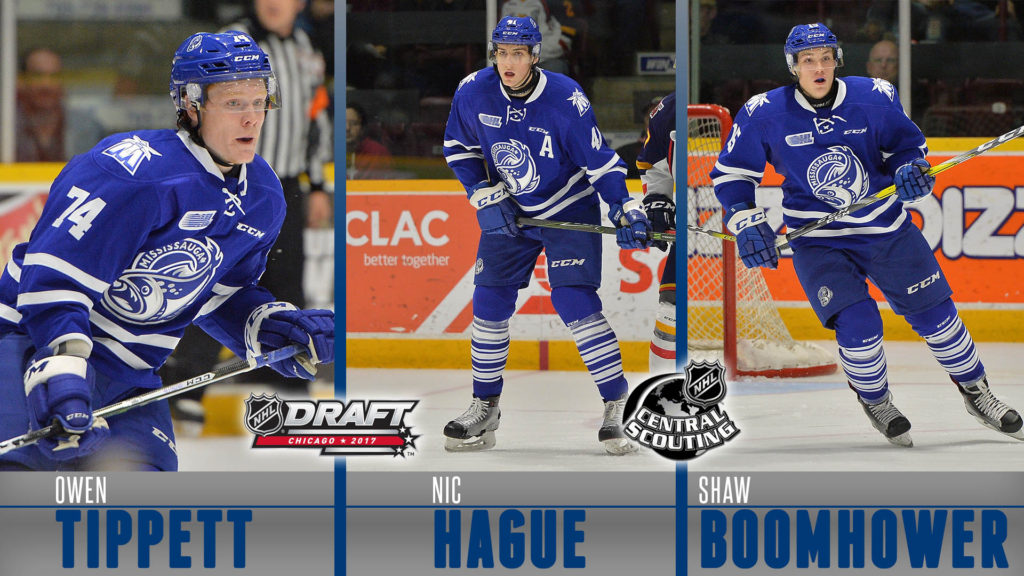 Tippett, the Steelheads fourth overall selection in 2015, has featured as an ‘A’-rated prospect all season. The Toronto Red Wings Minor Midget graduate is tied for the OHL lead in goals with the Erie Otters’ Alex Debrincat, having accounted for a team-leading 34 goals in 41 games in 2016 – 17. Tippett was named as an alternate captain for Team Cherry in the 2017 Sherwin-Williams CHL/NHL Top Prospects Game yesterday.

Hague, a former 2nd round selection of the Mississauga Steelheads, has also been featured as an ‘A’-rated prospect by NHL Central Scouting all season. The Kitchener, ON native, and 2015-16 Bobby Smith Trophy recipient as OHL Scholastic Player of the Year, leads all first-time NHL-Draft eligible OHL defensemen in goals, scoring 14 tallies in 41 games this season. Hague will join Owen Tippett at the 2017 Sherwin-Williams CHL/NHL Top Prospects Game in Quebec City, serving as an alternate captain for Team Orr.

Boomhower, a graduate from the Quinte Red Devils Hockey Club, signed with the Steelheads as a free agent this past off-season. The Steelheads first-year forward has recorded 10 points in 37 games, including five goals.

Boomhower, Hague, Tippett & the rest of the Steelheads will return to action in Mississauga at the Hershey Centre on Friday, January 27th versus the Barrie Colts. Tickets are still available here.