Bulldogs double up on Steelheads 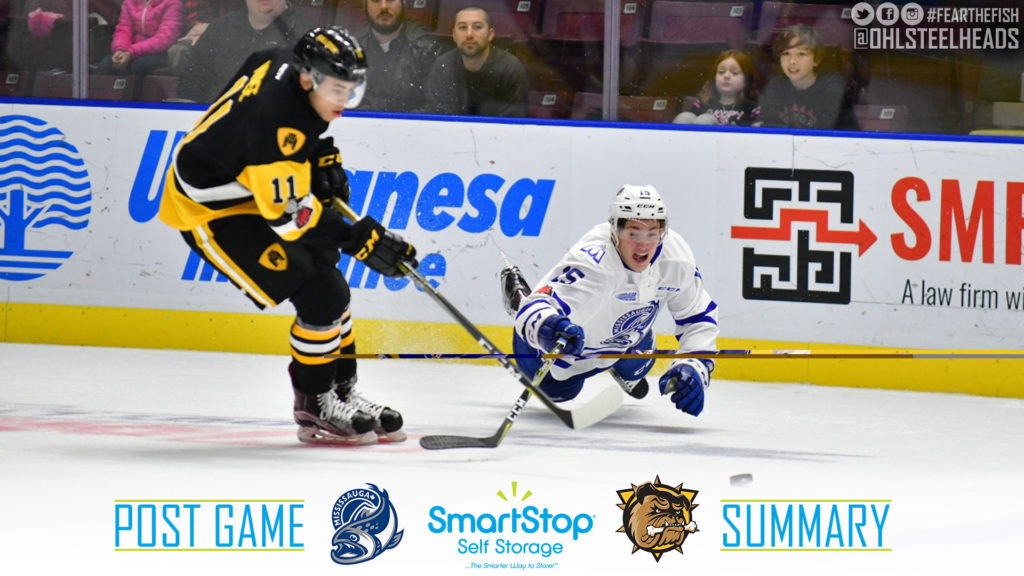 Following the holiday break, the Steelheads returned to action Thursday night with a visit to the Hamilton Bulldogs. The Steelheads (13-20-0-1) have yet to defeat the Bulldogs (21-7-3-3) yet this season, most recently dropping a 5-2 decision when they hosted the Bulldogs on December 10th.

Jacob Ingham and Kaden Fulcher received the nod for their respective teams to start between the pipes. The Bulldogs would see an early advantage, as Isaac Walker would serve two minutes for tripping. Seconds into the power play, MacKenzie Entwistle beat Ingham with his third of the season from Matt Strome and Benjamin Gleason to give the home team an early 1-0 lead. The Steelheads responded a few minutes later as Cole Schwindt got his team on the board at 6:01 of the first. Owen Tippett and Cameron Gaylor assisted on Schwindt’s seventh of the season. Hamilton responded with two back-to-back goals from Brandon Saigeon and Riley Stillman, who was making his debut after being acquired by the Bulldogs earlier today. Late in the frame, Trent Fox redirected a shot from Merrick Rippon past Fulcher to bring the Steelheads back within one. Isaac Walker picked up the secondary assist on Fox’s 11th of the season. The Bulldogs kept Ingham busy, outshooting the Steelheads 20-9 in the opening frame. The Steelheads trailed the Bulldogs 3-2 after 20 minutes of play.

Early in the second period, Owen Tippett jumped out on a breakaway and beat Fulcher to even the score 3-3. Tippett’s eighth of the season was unassisted. Approaching the halfway mark of the frame, the Bulldogs had a goal called off because of incidental contact on Jacob Ingham. Moments later however, Matt Strome would successfully restore the Bulldogs’ lead with his 18th of the season. At 14:19, another penalty would cost the Steelheads as the Bulldogs’ third ranked power play went to work. Saigeon scored his second of the night, from Gleason and Will Bitton to put Hamilton up 5-3. The Bulldogs outshout the Steelheads 14-9 in the middle frame and held a two-goal lead heading into the final period.

Two quick goals from Entwistle and McMichael, at 6:11 and 6:35 respectively, put things out of reach for the Steelheads as the Bulldogs held a 7-3 lead. Past the half way mark of the period, Nic Hague sent a rink-long pass to Michael Little, who then found Owen Tippett flying down the wing and he made no mistake beating Fulcher with his second of the night. The Bulldogs added an empty net goal late in the frame, doubling up on the Steelheads 8-4.

The Steelheads return home to host the Windsor Spitfires tomorrow for a 7PM start at the Hershey Centre.