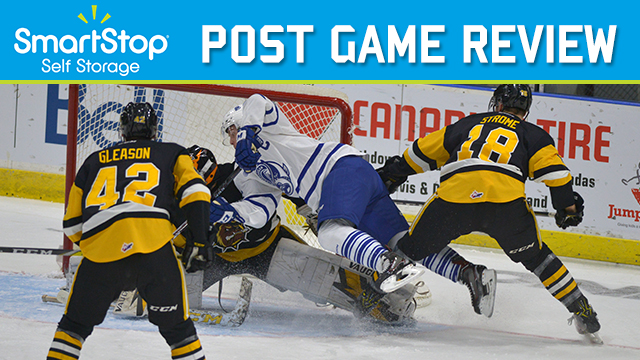 Hot off a four away-game winning streak, the Steelheads looked to give the fans a win on home ice. The Trout’s last win in the Hershey Centre was on October 21st, when they beat the Niagara IceDogs 6-5 in overtime. Tonight’s game pitted the Steelheads against the Hamilton Bulldogs, a team they have not faced since the 7-0 home opener loss on September 23rd. With Michael McLeod, Jacob Moverare, and Vili Saarijarvi all gone for the World Juniors, the boys had to rally together to put up a fight for the fans.

The Hamilton Bulldogs dominated the first period, gaining momentum quickly with a shot from Connor Walters. His third of the season came in at 3:21, off an assist from Brandon Saigeon. Hamilton would get another early goal, as Austin Osmanski took a hooking penalty. Will Bitten made his mark at 7:17, jamming a loose puck past Matthew Mancina. His ninth of the season was assisted by Benjamin Gleason and Matthew Strome. Saigeon scored his fifth of the season, and the Bulldogs third of the game at 12:38, assisted by Adam Laishram. The fourth and last goal of the period came less than a minute later, at 13:45. Strome’s 17th of the season, came off a pass from Bitten.  Tension ran high in the closing minutes, and both Michael Little and Connor Roberts were sent off the ice with five-minute majors for fighting. Osmanski conceded another penalty, this time for cross-checking at 19:35.

The Steelheads were able to get their fans on their feet, after a great breakaway from Shaw Boomhower. His shot was saved, but Jason Smith was able to keep control and get the Trout on the board. At 1:53 he scored his second of this season, assisted by Scoley Dow and Brendan Harrogate. The energy was short-lived however, as Hamilton responded quickly to Smith’s goal. Off assists from Zachary Jackson and MacKenzie Entwhistle, Riley McCourt scored his first of the season, and fifth for the Bulldogs at 2:18. Just over two minutes later, Hamilton extended their lead off an unassisted shot from Trent Fox. His goal was both Hamilton’s sixth for the night and Fox’s sixth of the season. Adam Laishram was sent to the box for slashing at 6:21, giving Mississauga their first power play of the night. Exactly one second after the penalty expired, Nicolas Hague fired a rocket past Kaden Fulcher. His 10th of the season was assisted by Scoley Dow and Stephen Gibson. Hague’s goal lit a fire under the Trout, and both Gibson and Owen Tippett had great chances on net. Strome was also sent to the box this period for a delay of game penalty at 13:59. While both teams scored two goals in this frame, the Steelheads outshot the Bulldogs 16-8.

Mississauga brought some energy into the final frame as both Aidan McFarland and Spencer Watson had great chances on net within the first two minutes. A double penalty sent Osmanski to the box for the third time in this game. He was booked for cross-checking, and Michael Cramarossa for roughing. This opened up the door for Hague to score his second of the game and 11th of the season. His goal came in at 5:33, from Stefan LeBlanc and Spencer Watson. Hamilton would respond again, and score their seventh goal at 13:10. Assisted by Cramarossa, Walters netted his second of the game. Osmanski was booked for his fourth penalty of the game, and with less than five on the clocked, sent off for his five-minute slue footing penalty. This would give the Bulldogs a five-on-four advantage, but not for long. At 15:54 three players were sent to the box; Boomhower for roughing, Laishram for goaltender interference, and Lemcke for roughing.  With the four-on-three advantage for the Trout, Owen Tippett capitalized and brought the Steelheads up to goal number four. His rocket of a shot came in unassisted at 17:41 to give him his 24th of the season. While Mississauga was able to rally later in the game, it was not enough and the Bulldogs took this game 7-4.

The Steelheads will complete the home-and-home with Hamilton tomorrow night at the First Ontario Centre. This game, and all away games, can be watched on Rogers TV. Be sure to follow us on Twitter, Facebook, and Instagram to stay up to date with all things Steelheads