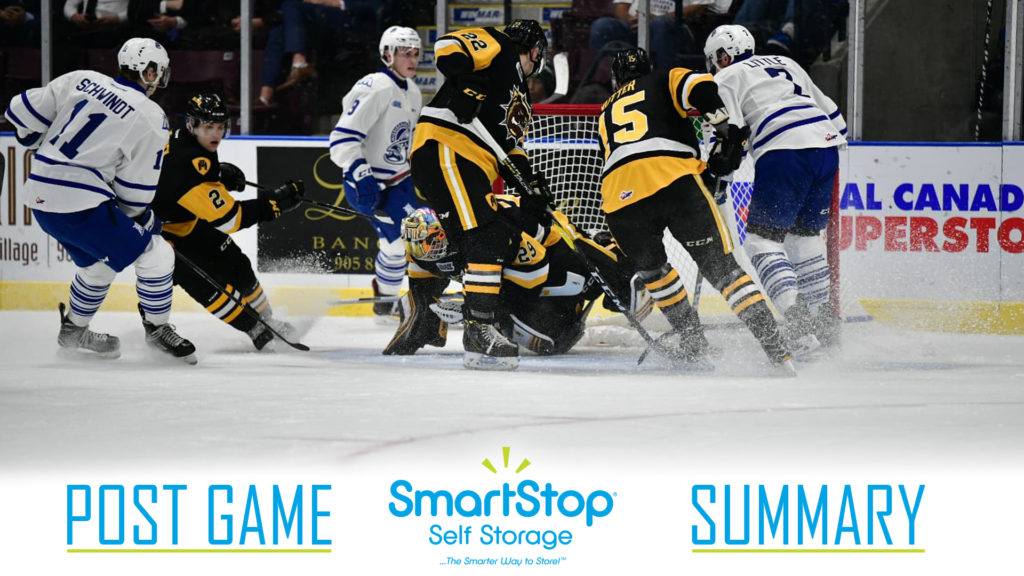 Following a 4-3 win over the Bulldogs last night, the Steelheads travelled to Hamilton Saturday for the second half of a home and home with the defending OHL Champions. Riding the high of a five-game winning streak, the Steelheads looked to carry that momentum into today’s game and extend their streak to six.

The opening period did not go well for the Steelheads, who found themselves in a four-goal deficit after 20 minutes of play. Similar to last night’s game, MacKenzie Entwistle opened the scoring to give the Bulldogs an early 1-0 lead. Approaching the midway mark of the period, the Bulldogs capitalized on a power play as Arthur Kaliyev found the back of the net to extend their lead 2-0. Kade Landry and Brandon Saigeon assisted on the goal. Late in the frame the Bulldogs added back-to-back goals 10 seconds apart, giving the home team a cushy 4-0 lead heading into the first intermission.

Despite five penalties in the middle frame, neither team could find the back of the net and the game remainded locked 4-0 at the end of 40 minutes of play.

Approaching the halfway mark of the final frame, the Steelheads finally solved Zachary Roy on a power play as Nicolas Mattinen struggled to control a puck in front of the net, and it ended up right on Cole Carter’s stick who made no mistake with his seventh of the season. Jacob Ingham did his job to keep the deficit at 3, making a big stop on Tim Fleischer who jumped out on a breakaway late in the frame. Down by 3 with time winding down in the frame, the Steelheads pulled Ingham in favour of an extra attacker. The Bulldogs took advantage as Nicolas Mattinen scored an empty net goal to seal a 5-1 win for the Bulldogs.

The Steelheads will close out their 3-in-3 weekend tomorrow afternoon in Sarnia for a 2:05 PM start.