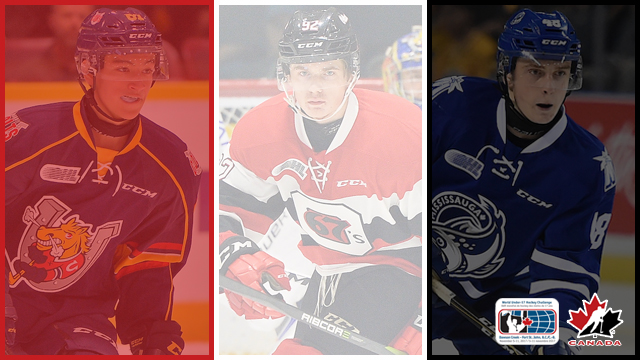 With the puck set to drop on the tournament in two weeks, the 23 OHL players on the three teams will face competition from the Czech Republic, Finland, Russia, Sweden and the United States in their quest for a gold medal.

OHL Players at the 2017 World Under-17 Hockey Challenge:

“This has been a lengthy process from the initial 111 players invited to our summer development camp to narrowing it down to the 66 on our three teams,” said Shawn Bullock, Hockey Canada’s senior manager of hockey operations and men’s national teams. “Our management group and scouting staff have assembled three competitive teams which will wear the Canadian jersey with pride at this prestigious, international competition.”

Single-game tickets are now available – $5 for pre-tournament games, $15 for preliminary-round games, $20 for quarter-finals, $25 for semifinals and the bronze-medal game and $30 for the gold-medal game. In addition to the single-game tickets, fans can take advantage of a variety of ticketing options, including the ‘Family 4-Pack’. For more information on tickets, pricing or how to purchase, CLICK HERE.

TSN and RDS, the official broadcasters of Hockey Canada, will air the semifinal from Dawson Creek and the bronze- and gold-medal games; please check local listings for details.