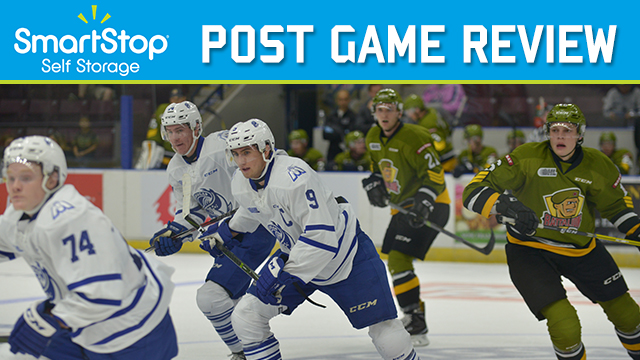 The Steelheads returned to action Thursday night, kicking off a six-game road trip in North Bay for a central division matchup against the Battalion. These two teams last met on New Year’s Eve, where the Steelheads came out on top by a score of 3-1. Jacob Ingham turned away 32 of the 33 shots he faced on NYE, and would get the nod for tonight’s contest as well. Newcomers Jacob Cascagnette and Trent Fox made their debut in the blue and white tonight, after being acquired by Mississauga at the OHL trade deadline.

It was a fast paced first period, as expected when these two teams meet, that saw a number of quality chances at both ends. At 5:49, Boomhower found McFarland all alone in front of the Battalion net, feeding him a pass from behind the goal, but McFarland’s shot was stopped by Battalion goaltender, Julian Sime. The Steelheads would open the scoring just past the midway point of the first as Ryan McLeod sent a beautiful cross-crease pass that Scoley Dow tapped in. Marcus Dickerson had the secondary assist on Dow’s fifth of the season. The Steelheads outshot the Battalion 10-8, and held a 1-0 lead after the first 20 minutes of play.

The Battalion came out strong in the second, looking to get on the board and even the score, and they did just that. At 3:48, Riley Bruce potted his first of the season, firing a wrist shot past Ingham, from Adam McMaster and Jesse Saban. Following a quick review to determine whether the play was offside, it was called a good goal. The score stayed locked at 1-1, with the Battalion outshooting the Steelheads 12-10 this period.

The Steelheads were awarded a power play opportunity early in the third period, as Brett McKenzie would sit for two on a crosschecking call. With the Steelheads pressuring, the Battalion would take another penalty, this one going to Zach Poirier for kneeing, giving the Steelheads a two-man advantage for 27 seconds. Trent Fox had some chances on the power play but his initial shot and rebound were both stopped by Sime. As McKenzie’s penalty expired, Steelheads’ captain, Michael McLeod provided a big boost with an impressive individual effort, but again, Sime was there to make the save. Around the midway point of the final frame, the Steelheads peppered Julian Sime, and it paid off as the newly acquired Jacob Cascagnette netted his first as a Steelhead to restore Mississauga’s lead. Spencer Watson and Nathan Bastian picked up the assists on Cascagnette’s seventh of the season and eventual game winner.

The Steelheads continue their northern road trip tomorrow, visiting the Sault Ste. Marie Greyhounds. Puck drops at 7:07 pm and you can catch the action live on Rogers TV Peel cable 10 in Mississauga, or follow along on Twitter @OHLSteelheads #gosteelgo.