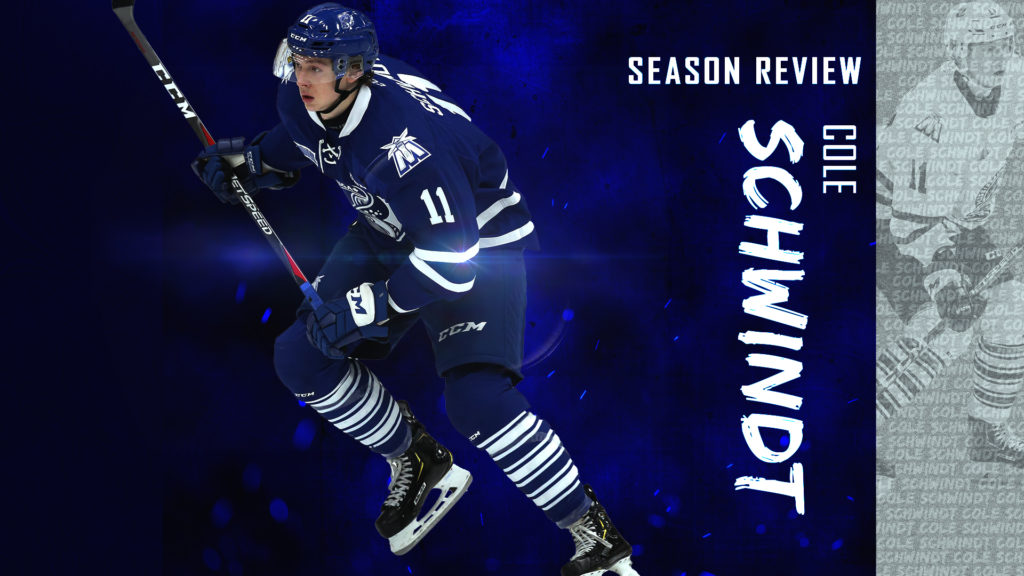 On January 21st, 2019 the NHL Draft Midterm Rankings were announced. One of the Mississauga Steelheads listed on the Central Scouting Rankings at #131 was Cole Schwindt. In his rookie season, Schwindt registered 18 points (8 goals, 10 assists) in 66 games with the hockey club. The 2018-19 season saw the big winger register 49 points (19 goals, 30 assists) in 68 games this season including doubling his season career high in goals and tripling his season career high in assists. The Kitchener, Ontario native was taken in the 4th round (69th overall) of the 2017 OHL Priority Selection. Schwindt finished in a tie for third in goals for the Steelheads this season finishing behind only Alan Lyszczaryczk and Cole Carter.

OHL Play of the Night

On February 18, 2019, Cole Schwindt scored off a between the legs pass from Cole Carter. Check out the “Cole-to-Cole” play here: (http://ontariohockeyleague.com/video/potn-cole-to-cole)

This play tied the game that lead to the Steelheads dominating win over the Knights for a final score of 9-4.

OHL Three Stars of the Week

On March 17th, 2019, in the final regular season game of the Steelheads season, draft eligible Mississauga Steelheads forward Cole Schwindt wrapped up his sophomore year with a career-high four points. In a 5-4 victory over the Barrie Colts, the offensive performance lead to his placement as the second star of the last week of regular season. Schwindt started by assisting on the first two goals of the Steelheads before scoring the third goal to bring the score within one. After teammate Nic Isaacson tied it, Schwindt scored the game winner with just under 2 minutes remaining in the game. He went on to earn the first star of the game and the win pushed the Steelheads into fifth place in the Eastern Conference. 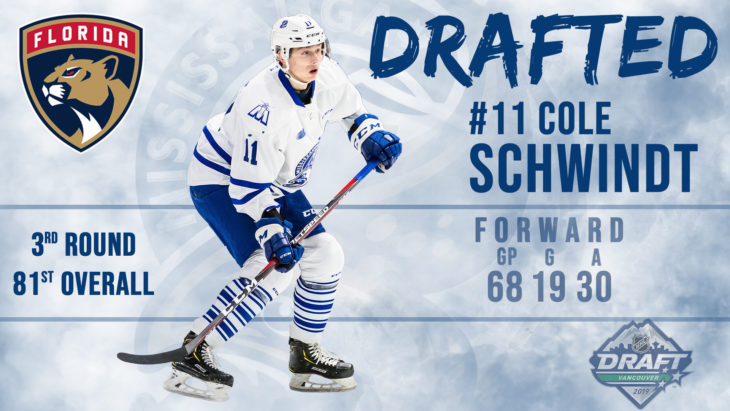 Selected by the Florida Panthers at the 2019 NHL Entry Draft

At 6’2” 183 lbs, the right-handed, Cole Schwindt was the second of three Steelheads taken in the 2019 NHL Draft. Owning three 4th round picks entering the day, the Florida Panthers made a draft-day trade on Saturday to move up into the 3rd round. Florida sent two 4th round selections (104th and 114th) to the Columbus Blue Jackets for the 81st overall pick. The Panthers went on to select forward Cole Schwindt.

Following the draft, Schwindt got his first look in a Panthers uniform at development camp. With a mass of fans watching, it took less than a minute for the third-round pick to bring people to their feet. Schwindt jumped on a loose puck in front of the net and sent it past camp invite Stefanos Lekkas to give Team White an early 1-0 lead at 0:25.

It was a familiar face that helped lead to Schwindt’s opening tally. Owen Tippett, who spent parts of two seasons suiting up with the Mississauga Steelheads, created the rebound that led to the goal.

“It was pretty cool,” said Tippett, who the Panthers selected with the 10th overall pick in the 2017 draft. “Obviously we played together a bit in Mississauga, so it was good to play with him again.”

Making his development camp debut, Schwindt said the goal alleviated a lot of nerves. “I knew I was playing with Tipp,” said Schwindt, a versatile forward. “He’s such a great player. He kind of calmed me down a bit. After that goal went in, it felt good… A big thing that we worked on this whole week was stopping in the blue paint. Luckily, I remembered to do that. That’s a big part of my game.”