Colts double up on Steelheads 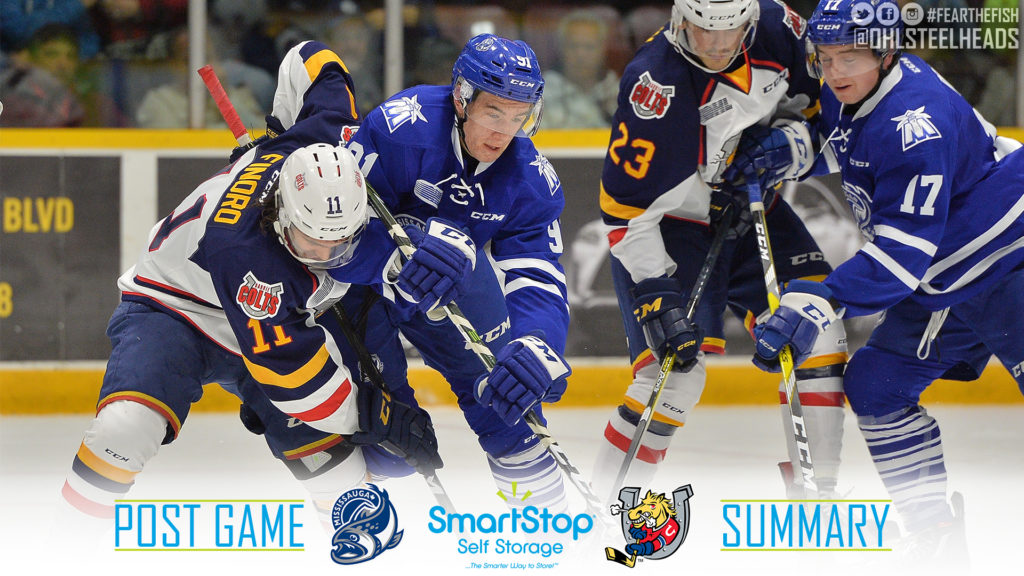 Coming off a tough weekend that saw them go 0-3, the Steelheads looked to bounce back Thursday evening as they paid a visit to their central division rivals, the Barrie Colts. Barrie also came into tonight’s game riding a three-game losing streak. These two teams last met on October 28, where the Steelheads doubled up on the Colts 4-2.

The Steelheads definitely got the start they wanted as Nic Hague opened the scoring just 2:05 into the first. His 14th of the season was unassisted as the Steelheads jumped out to an early lead. Five minutes later, at 7:54, Ben Hawerchuk evened things up with his fourth of the season from TJ Fergus and Justin Murray. Shortly after the tying goal, Ian McKinnon would head to the box to serve four-minutes for roughing. The Colts would take the lead as Ryan Suzuki capitalized on the man-advantage to put Barrie up 2-1. Murray and Jason Willms assisted on Suzuki’s third of the season. Shots on goal were 12-10 in favour of the Colts and the Steelheads trailed by one heading into the first intermission.

Similar to the opening frame, the Steelheads came out strong to start the second. Albert Michnac evened things up at 5:52, firing a rocket past Leo Lazarev. Keean Washkurak and Thomas Harley assisted on Michnac’s 15th of the season. Late in the frame, Hawerchuk restored the Colts one-goal lead with his second of the night from Fergus and Alexey Lipanov. The Steelheads outshot the Colts 9-5 in the middle frame, but again, were down by one heading into the intermission.

The Colts added two goals in the third from Tyler Tucker and Lucas Chiodo giving them a bit of a cushion. At 15:40, Hague cut the deficit with his second of the night to bring the Steelheads back within two. Owen Tippett and Michnac assisted on the goal. With just over two minutes to go in the third, Jacob Ingham came off in favour of an extra skater. Unfortunately the Colts were able to gain control and find the empty net, sealing a 6-3 victory as the Steelheads dropped their fourth straight.

The Steelheads are back in action tomorrow night to visit the Sudbury Wolves.