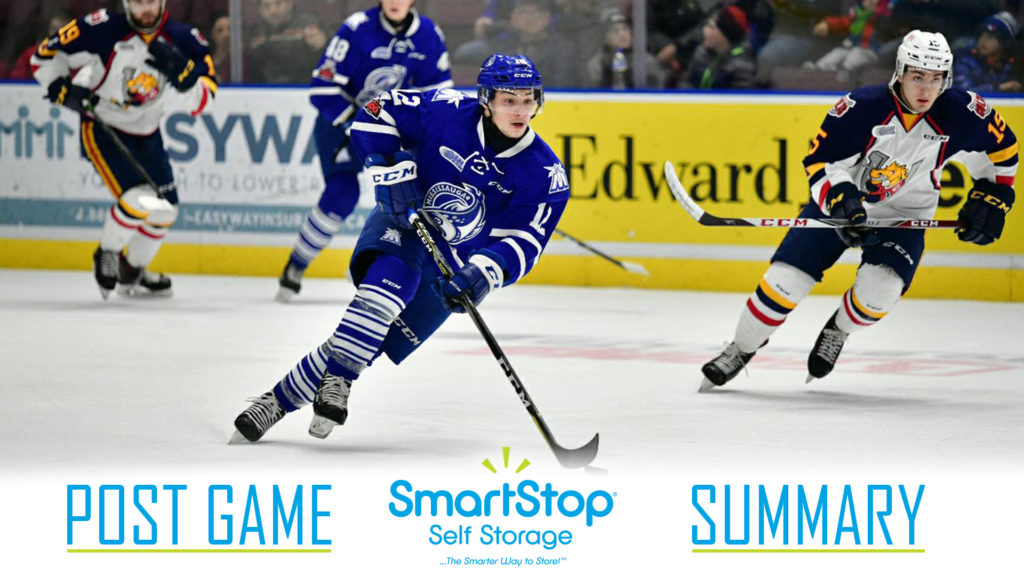 Looking to snap a three game losing skid, the Mississauga Steelheads returned to action Thursday night for a central division tilt against the Barrie Colts. In their previous meeting this season the Steelheads edged the Colts 2-1 to take a 1-0 season series lead. Despite scoring the opening goal, the Steelheads struggled to maintain a lead in tonight’s contest and dropped a 4-2 decision.

Things got off to a slow start as both teams looked to find their stride. The Steelheads suffered an early loss as forward Alan Lyszczarczyk received a five-minute major penalty and 10-minute game misconduct for a check to the head. James Hardie served the penalty and the Steelheads’ special teams went to work to kill off the infraction. After a successful penalty kill, the game returned to even strength with the score still locked 0-0. Nearing the end of the frame, the Steelheads opened the scoring as Cole Carter found the back of the net on a power play. Newcomer Liam Ham picked up his first point as a Steelhead as he and Thomas Harley assisted on Carter’s 20th of the season.

The Steelheads’ 1-0 lead was short lived as the Colts responded just 36 seconds into the middle frame. Jacob Tortora’s fourth of the season came on the power play and Lucas Chiodo and Joey Keane picked up the assists. With time winding down in the frame, the Steelheads were able to capitalize on another power play opportunity to restore their lead. Michael Little beat Kai Edmonds with help from Owen Tippett. Unfortunately the lead was once again short lived as the Colts responded a minute later to even the score 2-2.

Barrie added two unanswered goals in the final frame, en route to a 4-2 victory. The first came from Aidan Brown from Christopher Cameron at 9:07 and the second from Tortora, his third of the game, at 12:07. The Steelheads were unable to come back from the two-goal deficit and were handed their fourth straight loss.

The Steelheads return to home ice tomorrow evening to host the Hamilton Bulldogs at the Paramount Fine Foods Centre for a 7PM puck drop.