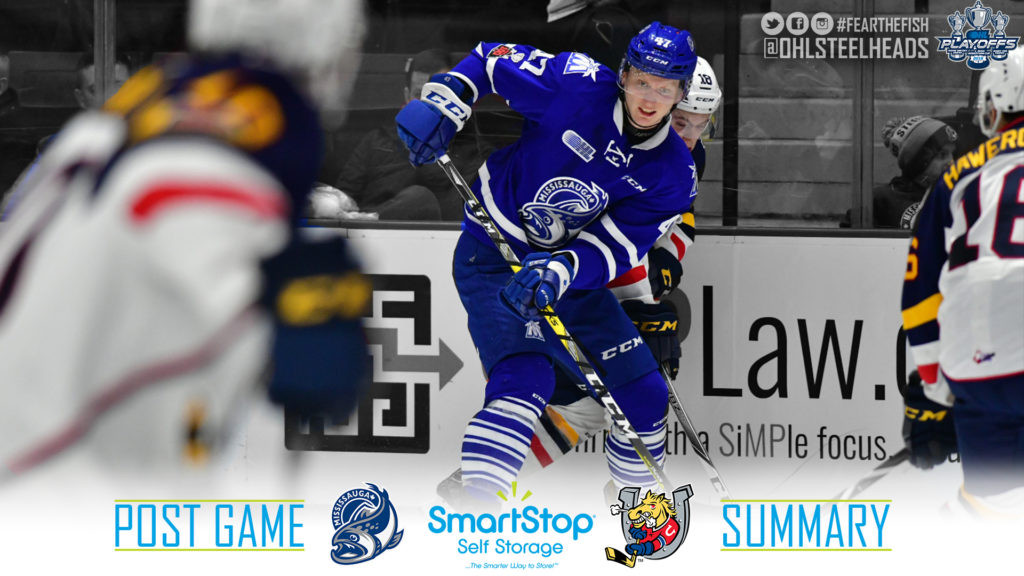 After making a statement in game one of the Eastern Conference quarterfinal against the Barrie Colts, the Steelheads travelled back to Barrie for game two looking to take a 2-0 lead in the series.

The Colts shifted the momentum in their favour early on, taking a 1-0 lead just two minutes into the opening frame. Lucas Chiodo opened the scoring at 2:08 with assists going to Aaron Luchuk and Dmitry Sokolov. The home team maintained their lead for the majority of the period, until Keean Washkurak got the Steelheads on the board at 15:55. The Steelheads were putting the pressure on and after a flurry of shots, Washkurak was able to bury one past Leo Lazarev to even the score 1-1. Cole Schwindt and Ian McKinnon assisted on Washkurak’s first of the postseason. The Steelheads outsho the Colts 12-10 in the opening frame and the game was locked 1-1 heading into the first intermission.

Ryan McLeod got things going for the Trout in the second, scoring a beautiful goal to put the Steelheads up 2-1. Nic Hague assisted on McLeod’s second of the postseason. That would be the lone goal of the frame as the Steelheads held a 2-1 lead heading into the second intermission. Shots on goal were 11-8 in favour of the Steelheads.

It was all Barrie in the final frame as they scored three unanswered goals to make it 4-2. The first came from Aaron Luchuk at 5:45, the second from Dmitry Sokolov at 9:43 and the third from Lucas Chiodo at 11:51. Late in the frame, the Steelheads pulled Jacob Ingham in favour of an extra attacker, but the Colts capitalized and found the back of the empty net to make it 5-2. With time running out, the Steelheads were able to add one final goal, brining the score to 5-3. That would do it for game two as the Colts evened up the series 1-1.