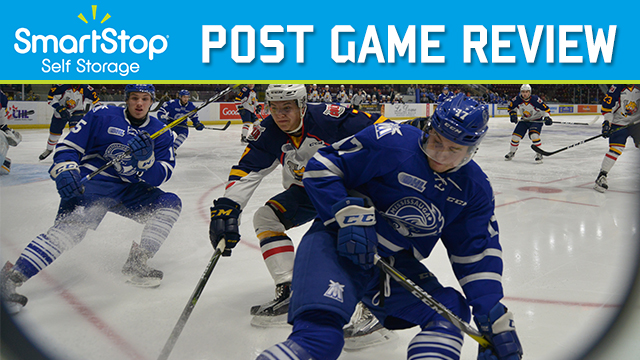 Coming off a 3-1 win over the Hamilton Bulldogs on Wednesday, the Mississauga Steelheads returned to the Hershey Centre for their first home game of 2017, looking to add another win after winning their last three contests.

The first period started off with a boarding penalty which sent Michael McLeod to the box at 2:45. The Trout did their job to kill off the penalty and no goals were added by the Colts. Jacob Ingham stood tall in goal, making some great saves to keep Barrie off the board. The game remained scoreless after the first 20 minutes of play.

Another Steelhead penalty started off the second period, a high sticking call made out to Ryan McLeod at 3:37. Shortly after, another penalty was called to Murray on the Colts for roughing at 4:50. Neither team would capitalize on the man-advantage. The Colts were first on the board as Anthony Stefano scored his 12th of the season at 8:10. The Steelheads were quick to respond with a goal from Spencer Watson, his 11th of the season, at 9:01. Assists on the goal went Owen Tippett and Jacob Moverare, to make it a 1-1 game heading into the second intermission.

In the final 20 minutes, a boarding penalty by the Colts was called 54 seconds into the frame, opening the door for a go-ahead goal from the Steelheads. Spencer Watson netted his second of the game and 12th of the season from Nathan Bastian to give Mississauga a 2-1 lead. At 18:06 the Colts evened the score as Anthony Stefano scored his second of the game to bring the score to 2-2. The game eventually went into overtime with the Colts scoring the game winner at 2:39 from Giordano Finoro, ending the 3-game Steelheads’ three-game win streak.

The Steelheads are back in action at the Hershey Centre to take on the London Knights on Sunday January 8th at 2:00pm. You can catch this game, and all away games on Rogers TV. Be sure to follow us on Twitter, Facebook, and Instagram, @OHLSteelheads to stay caught up on all things Steelheads.