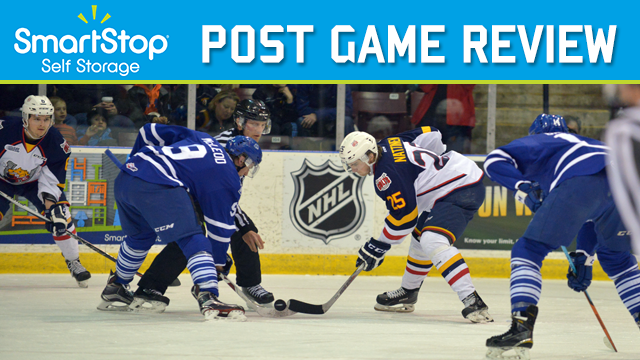 The Mississauga Steelheads were back on the road Thursday night, for a Central Division tilt against the Barrie Colts. Tonight marked the first time these two teams have met since the Steelheads pushed the Colts to game seven of the Eastern Conference Quarterfinals last season. The rivalry continued tonight as the Steelheads fought their way back several times and eventually forced the game into overtime, but unfortunately the Colts came out on top as Roy Radke scored in the shootout to seal a 5-4 win for Barrie.

Steelheads goaltender, Jacob Ingham got the nod tonight in his hometown while David Ovsjannikov started in goal for the Colts. Things got off to a slow start before Barrie’s Roy Radke opened the scoring at 15:08. Adrian Carbonara assisted on Radke’s fourth of the season as the Colts held a 1-0 lead after the first period of play.

Mississauga came out strong in the second, pressuring hard and controlling the pace of play. Their hard work paid off as Scoley Dow scored his first OHL goal to get the Steelheads on the board and even the score 1-1. Damian Bourne and Ryan McLeod picked up the assists on Dow’s first of the season. The Colts were quick to respond as Lucas Chiodo capitalized on a power play to restore Barrie’s one-goal lead heading into the final frame.

Things really picked up in the third as the Steelheads and Colts traded goals back and forth, keeping the game within one. Owen Tippett buried his own rebound at 4:42 of the third to even the score 2-2. At 11:02, Anthony Stefano was able to restore Barrie’s lead 3-2 with a shorthanded marker from Chiodo and Cameron Lizotte. Less than a minute later, the Steelheads were able to capitalize on the man-advantage and even the score 3-3 as Nic Hague scored his sixth of the season from Ryan McLeod and Nathan Bastian. Tom Hedberg wired a shot from the point at 16:53 for his first OHL goal to put Barrie back in the lead 4-3. With time winding down and Ingham pulled in favour of an extra attacker, Ryan McLeod kept the Trout alive with a late goal to send the game into overtime. Hague and Michael McLeod assisted on Ryan’s first of the season.

The 3-on-3-overtime period was fast paced and saw a number of chances at both ends of the ice, but a shootout was necessary to determine a winner. Roy Radke was the only shooter to find the back of the net as the Colts topped the Steelheads 5-4.

The Steelheads return home to the Hershey Centre tomorrow to host the Niagara IceDogs for a 7:00 pm start.