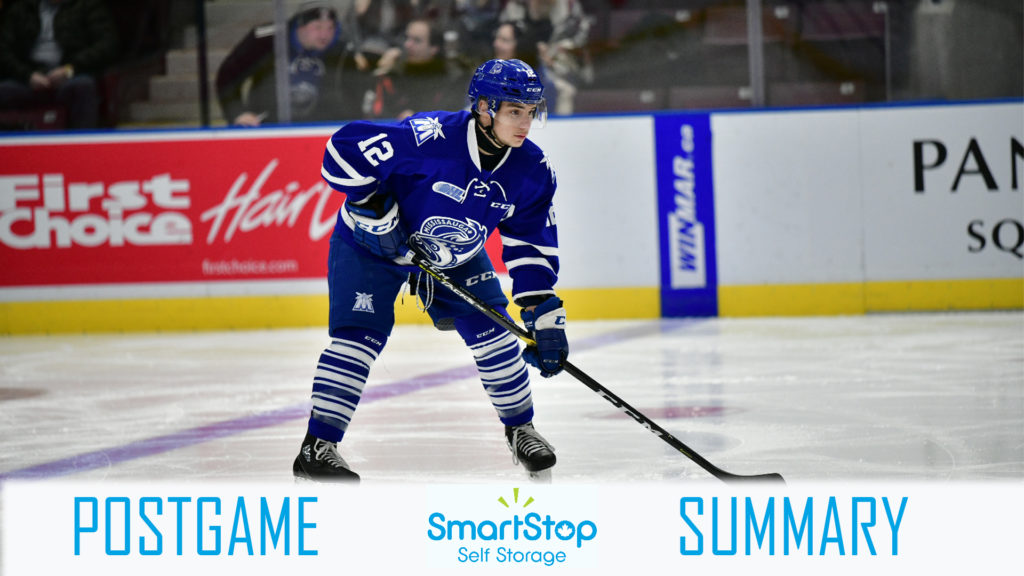 Mississauga, ON – The Mississauga Steelheads took on the Erie Otters on Sunday afternoon in the third game of a 3-in-3 weekend.

The Steelheads and Otters faced off in Erie on Saturday night, where the Otters walked away with a 5-4 overtime win. Luca DelBelBelluz scored the first goal of his career in the contest, while also adding an assist for the first multipoint game of his career. The teams travelled to Mississauga on Sunday for their third meeting of the season.

The Otters opened the scoring on the powerplay early in the first, as Maxim Golod tapped home a pass in front of the net from Chad Yetman. The Steelheads had three powerplays in a row, but couldn’t beat Daniel Murphy, hitting the post twice on their opportunities. Keean Washkurak found Nicholas Canade on a 2-on-1, who beat Murphy up high to tie the game at one. Ethan Del Mastro received a second assist on the play for the first point of his OHL career.        At the end of the first, the Steelheads were outshooting the Otters 17-6.

Mississauga broke the tie midway through the second, as Nicholas Canade went backhand-forehand on a breakaway for his second goal of the game. The intensity mounted in the game, with both sides ramping up the physical play, as the Fish defended their lead. Neither team was able to score for the remainder of the period, with the Steelheads heading into the second intermission ahead 2-1.

Erie got off to a quick start in the third, as Daniel D’Amato beat Edmonds to tie the game at two. Midway through the frame, Liam Ham wristed a shot from the top of the faceoff circle that trickled through the legs of Murphy to regain the Steelheads lead. The Otters answered back, as Hayden Fowler scored on a penalty shot to tie the game at three. Regulation play would solve nothing for the third time in as many meetings this season, as the teams needed overtime to break the deadlock.

The Steelheads had numerous scoring opportunities in the overtime period, but couldn’t find a way to beat Murphy. Shots on goal in overtime were 4-3 for Mississauga, as the teams headed to a shootout. Keean Washkurak scored the first goal, as he went top shelf on Murphy. With Hayden Fowler shooting, the game was in the hands of Kai Edmonds, who was able to make the save and secure the victory for the Fish.

Following the game, Assistant Captain Nicholas Canade had the following to say about the teams big weekend “It was a big weekend for us. We have had a slower start to the season that didn’t go the way we wanted it to, but this weekend worked out big for us. Five points in the three games, we need this momentum going forward. We have a few tough weekends ahead, so we needed this to build off of.”

The Mississauga Steelheads will return to the Paramount Fine Foods Centre on Thursday, November 21st for the club’s 8th annual Pink at the Rink game, presented by Pandora Square One. The Steelheads will wear unique pink jerseys that will be available for auction online following the game, with all proceeds going towards the Canadian Cancer Society.

Thursday will also represent the second “Winning Nights” game of the year, where if the Steelheads walk away with a victory, fans in attendance will be able to exchange their ticket to a free ticket to the team’s game on December 13th.

Tickets to the Thursday’s 8th Annual Pink at the Rink game can be purchased by visiting the Box Office, online through ticketmaster.ca or by calling 905-502-9100.