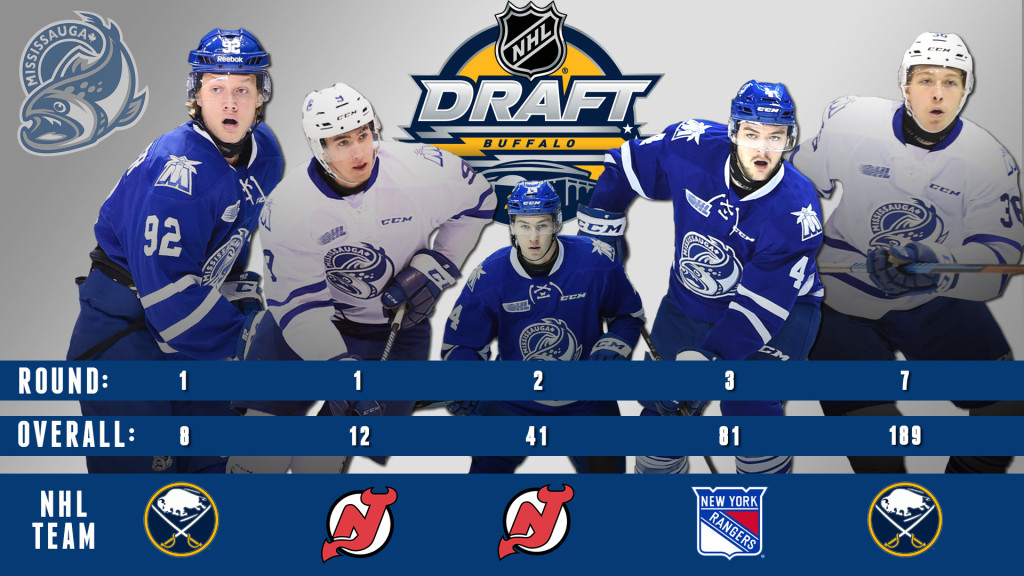 It was an exciting weekend down in Buffalo for the Mississauga Steelheads as five players were drafted in the 2016 NHL Entry Draft.

On Friday night, both Alexander Nylander and Michael McLeod were selected in the first round. Nylander went eighth overall to the Buffalo Sabres and McLeod went twelfth overall to the New Jersey Devils. It was a long awaited moment for both players as all their hard work finally paid off.

When asked how it felt to hear the Buffalo crowd cheer for him, Alex responded; “This was the first time I’ve heard anything like that and it was unbelievable to hear the fans chant. It was a surreal moment for me and it’s a really big dream come true.”

When asked about who he got to share this experience with, Mikey replied; “My brothers and my parents. Growing up, it was our dream to play in the NHL and when I went to hug them, they were just so proud. It was really exciting.”

McLeod, the newest captain for the Steelheads, recorded 61 points (21 goals, 40 assists) in 57 games played throughout the 2015-16 season. In the playoff run against the Colts, McLeod added nine points (3 goals, 6 assists) in the seven game series.

Saturday was just as exciting for the Mississauga Steelheads as Nathan Bastian, Sean Day and Austin Osmanski were all selected throughout the day.

Nathan Bastian was drafted early in the second round, 41st overall, to the New Jersey Devils alongside the other half of the “super buddies” duo – Michael McLeod. Steelheads defenceman, Sean Day, was taken in the third round, 81st overall, to the New York Rangers. The final drafted player for the Steelheads was Buffalo native, Austin Osmanski, who was selected in the seventh round to his hometown team – the Buffalo Sabres.

Nathan was asked if New Jersey was where he was hoping to go, he responded; “Yeah, for sure – especially after seeing Mikey go there earlier. I think it’s cool that were together now. He even gave me a bit of a hint that it might happen beforehand.”

Sean was asked how much of a relief this was for him, based on everything he’s gone through on and off the ice, he responded; “It’s awesome! Now you start preparing for something new and you don’t have all the media attention like you do in your draft year. I’m having fun with it though. One of my agents told me that New York was looking at me and I could tell that they wanted me. That’s the most important thing – going to a team that wants you and wants to develop you. I think I saw that when they picked me four seconds in.”

Defenceman, Sean Day, ended the 2015-16 season with 22 points (6 goals, 16 assists) in 57 games. Throughout the seven-game playoff series against the Barrie Colts, Day put up three assists in seven games.

We asked Austin what it felt like to be drafted to his hometown team, he responded; “If you were to tell me that I would be walking out of that arena, in that city, wearing that sweater, I would call you crazy. It’s a dream come true, but now the work gets amped up even more.”

Osmanski recorded 10 points (2 goals, 8 assists) in 65 games throughout the 2015-16 season, and one assist in seven playoff games against the colts.

Now that Road to the Draft has come to an end, the Road to the NHL begins, and all the hard work that goes along with it.

On behalf of the Mississauga Steelheads organization, we would like to send congratulations to all five of these players! Don’t Doubt the Trout!