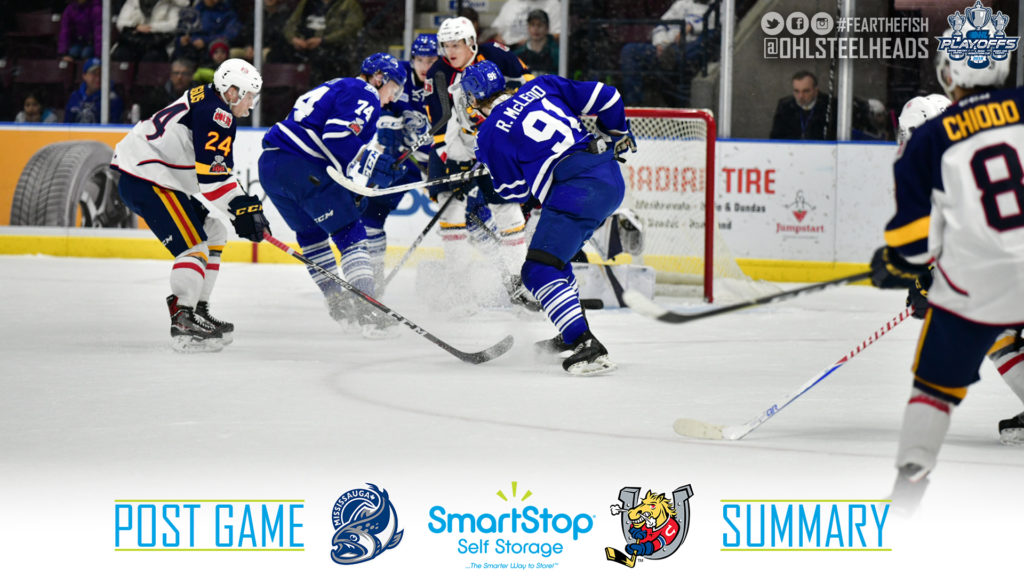 With the series tied at two, the Steelheads were looking to regain their lead Saturday night in Barrie. Mathieu Foget made a grand return with Mississauga’s first goal of the night and Michael McLeod eventually scored to tie the game in the third, but the Colts were ultimately victorious and gave themselves the chance to win the series Sunday. With a final score of 5-2 in regulation, Barrie has a 3-2 series lead.

There were no goals or penalties in the first period, but both teams had some pretty big opportunities. Emanuel Vella and Leo Lazarev each faced a large number of shots but they couldn’t be beat. Owen Tippett had a late breakaway attempt but couldn’t get it past Lazarev. Vella performed well when Barrie swarmed Mississauga’s net and he kept the Colts off the board. The frame ended with the Steelheads leading 27-19 in shots on goal.

Justin Murray opened the scoring early in the second, giving him his first of the postseason. Trent Fox and Aaron Luchuk were both sent to the box for roughing five minutes later and both teams held their own during the ensuing 4-on-4 hockey. Back at full strength, Mathieu Foget got his first of the playoffs after returning from a four-game suspension. His top shelf goal was assisted by Owen Tippett and Thomas Harley. It wasn’t long before Lucas Chiodo registered his fourth of the series and got the Colts back up by one. Foget collided with Jason Willms a minute later and the Steelheads closed the period shorthanded while he sat for kneeing. Both teams’ shots went way down, finishing the frame with 9-5 on the shot clock still in favour of the Fish.

With their momentum building, Mississauga fought hard and earned their first power play of the game when Justin Murray was sent off for interference. Though they couldn’t make anything of the advantage, Mikey McLeod tied the game with a beautiful goal at the halfway point of the game. His fifth of the playoffs was a backhanded shot assisted by Trent Fox. Mississauga kept the Colts from scoring and continued with their significant lead in shots, but Tyler Tucker fired one past Vella from the blue line and scored what would be the game-winning goal. Dmitry Sokolov scored one of his own a few minutes later with Mikey McLeod off for tripping. That was followed by another power play goal, this time from Jason Willms with Nic Hague in the box for interference. With less than a minute to play, the Steelheads weren’t able to tie it up again. Though the shots on goal were 48-35 for the Fish, it was Barrie that got the win.

The Steelheads will fight to tie the series at three games Sunday. Game six begins at 2 p.m. at the Hershey Centre.