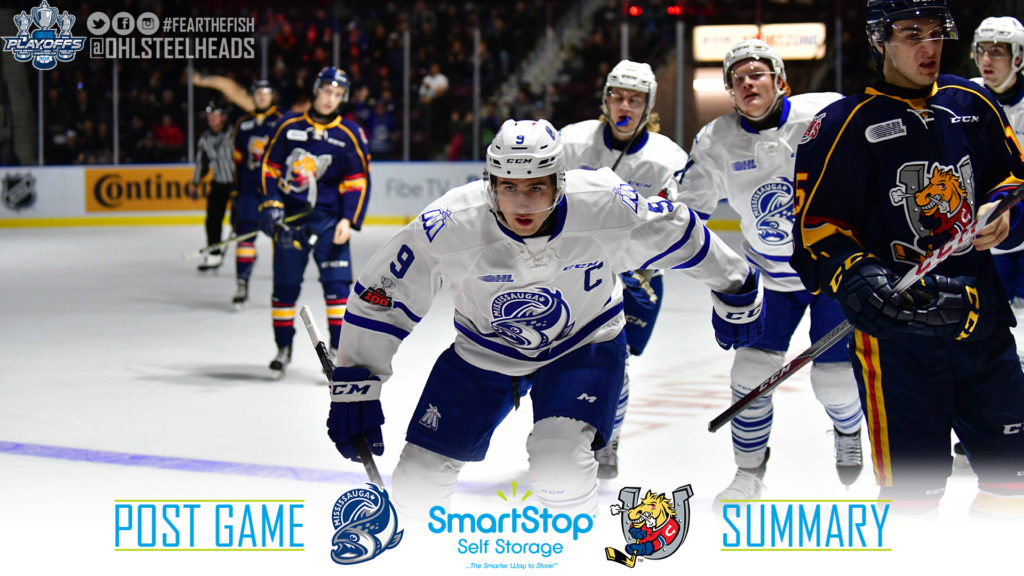 With the OHL playoffs getting underway tonight, the Mississauga Steelheads travelled to Barrie to open their Eastern Conference quarterfinal matchup against the Colts. The Steelheads, who took the regular season series against the Colts, winning four of their six meetings, were looking to carry that success into this series.

Both teams came out strong in the opening frame, generating a number of quality scoring chances. The home team would strike first as the OHL’s point leader, Aaron Luchuk snuck a shot past Ingham to open the scoring. Lucas Chiodo assisted on the goal. Late in the frame, the Steelheads were handed their first power play opportunity of the game as Jason Willms was called for hooking. Seconds into the power play, Ryan McLeod set up Trent Fox who made no mistake burying his first of the postseason to even the score 1-1. Nic Hague picked up the secondary assist on the tying goal as the game stayed locked at 1-1 heading into the first intermission.

The second period started much like the first with both teams trading shots. The Steelheads got their second power play opportunity of the game when Christopher Cameron was called for delay of game, but the Fish did not capitalize with the man-advantage. Barrie got a power play of their own when Ryan Wells was called for hooking at 7:01 into the frame. It was the Steelheads who scored, when Ryan and Michael McLeod got a two-on-one breakaway with Ryan tallying his first goal of the playoffs and second point of the night. The Colts received another power play opportunity when Isaac Walker was caught high-sticking. This time, Barrie found the back of the net thanks to Lucas Chiodo tallying his first goal of the playoffs. The Colts finished the period on the power play when Owen Tippett was sent to the box for tripping. Tippett came flying out of the goal and capitalized on a Barrie turnover to regain the lead. The Fish extended their lead when Michael McLeod was awarded penalty shot. Heading into the 2nd intermission, the Steelheads held a 4-2 lead.

The final period saw much of the same things with Ryan McLeod getting called for goalie interference 19 seconds into the frame. Less than two minutes later, Michael Little was called for hooking, giving Barrie a 5-on-3 chance. The Colts couldn’t find the back of the net and Mississauga killed off two penalties back-to-back. Soon after, Trent Fox scored his second of the night off a feed from Owen Tippett to make it 5-2 for the Fish. Tippett got his second of the game only a minute and nine seconds later, at 7:24 into the period, giving the Steelheads a commanding 6-2 lead. The final buzzer sounded giving Mississauga the 1-0 series lead.

Game two of the quarterfinal will take place on Monday, March 26th at the Barrie Molson Centre. Puck drop is at 7:30 PM.