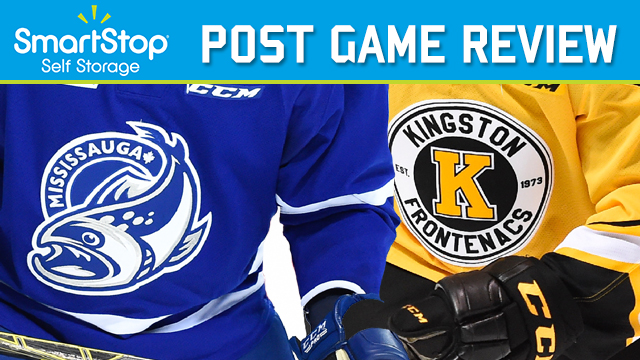 Returning to action after a 10-day OHL Christmas break, the Steelheads looked ready to take on the Kingston Frontenacs. This was the first time this season that the two teams met, and the first time that Spencer Watson faced his old team. All eyes were on Watson, who is wearing the Captain’s ‘C’ while Michael McLeod plays for Team Canada in the 2017 World Juniors.

Mississauga fans did not have to wait long to get to their feet, as Owen Tippett opened up the scoring at 3:52. His 26th goal of the season, was assisted by Brendan Harrogate and Nathan Bastian. After a strong drive by the Trout, fans were cheering once again, as Nicolas Hague fired in a rocket from the blue line. Hague’s 13th of the season came in at 11:16, off a pass from Stefan LeBlanc. LeBlanc would soon after take a hooking penalty that opened up the door for a Kingston goal. Warren Foegele, assisted by Jason Robertson and Eemeli Rasanen, netted his tenth of the season at 12:25.

An early Mississauga penalty on Scoley Dow for roughing, allowed the Frontenacs to capitalize on the man advantage. Jason Robertson scored his 15th of the season, at 4:01, assisted by Stephen Desrocher and Rasanen.  Austin Osmanski was booked at 7:23 for interference to put Kingston on their third power play of the game. After a great hit, from Shaw Boomhower, Rasenen retaliated and took a cross-checking penalty at 8:15. This 4-on-4 gave Ryan McLeod a great opportunity on net, but Kingston goaltender Jeremy Helvig made a great save to keep this game tied at two. Moments later, Jacob Moverare would have his own opportunity from the blue line, but was blocked by defenseman Liam Murrary, who would end his shift visibly wincing. In the last five minutes of the period, a shot on Steelheads’ goalie Matthew Mancina, left the puck open in front of the net. As players scrambled to clear the puck, Hague was booked for interference at 15:31. This penalty did not prove to be a dangerous one, as Owen Tippett was able to steal an easy giveaway and make a great short-handed breakaway. Unfortunately for the Trout, Helvig came up strong with another great save to keep his team alive. A late penalty on Nathan Dunkley, would put the Steelheads on a power play in the dying seconds of the period, and up a man to start the third.

The Steelheads had their first of many great opportunities on net in this period, as Brendan Harrogate almost poked in a rebound from Tippett. Helvig was able to make the save, right on the line with his skates. While Mancina made three back-to-back pad saves, Kingston was able to break the tie at 4:30 with their first full-strength goal of the game. Ryan Cranford was able to net one over Mancina’s glove, off a pass from Zach Dorval and Jakob Brahaney. Another great chance came off a breakaway by Harrogate, but the Trout were denied again by Helvig. Mississauga turned the heat on in the second half of the third, but ultimately were denied another win on home ice, as the Frontenancs took this game 3-2.

The Steelheads return to action on Friday, December 30, to take on the Niagara IceDogs. Puck will drop at 7:00pm. Be sure to follow us on Twitter, Facebook, and Instagram to stay up to date with all things Steelheads.