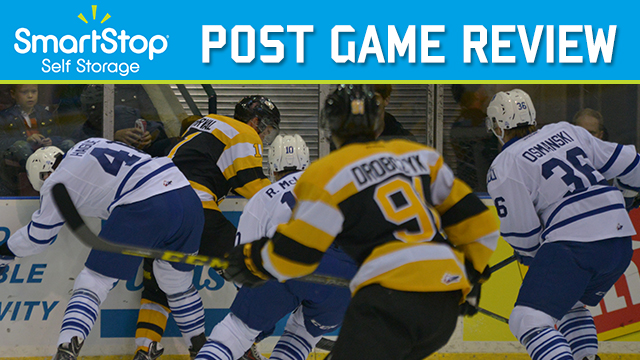 Following a 4-3 overtime win over the Barrie Colts, the Steelheads travelled to Kingston Saturday night to take on Frontenacs. These two teams last met on December 28th in Mississauga where the Fronts edged the Steelheads 3-2. For tonight’s contest, both teams were slightly short staffed with players away for the 2017 Sherwin-Williams CHL/NHL Top Prospects Game taking place Monday in Quebec City. With leading scorer, Owen Tippett and defenceman, Nic Hague out of the lineup, the Steelheads looked to pick up two points for the second night in a row.

The Steelheads were awarded an early power play opportunity, as Sergey Popov would sit for two on a tripping call. They managed a few solid chances, but were unable to capitalize on the man-advantage. Nearing the end of the frame, Jake Ramalho and Cody Caron would drop the gloves and each receive five for fighting. The Steelheads outshot the Fronts 11-8, as the game remained scoreless heading into the first intermission.

The middle frame was very similar to the first as Mississauga outshot the Fronts in the second 11-8, and neither team was able to find the back of the net. The Steelheads’ best opportunity came from Trent Fox who had a breakaway but was unable to beat Jeremy Helvig.

The third period was an exciting one, with back and forth action and a number of solid opportunities at both ends. The goaltenders were the story in this contest, as each made a number of key saves to keep their teams in it. Shaw Boomhower created a good chance for the Steelheads and Spencer Watson was right on the doorstep to bury the rebound but was unable to get past Helvig. On the other end, Mancina came up with two big saves to keep Kingston off the board and send this game into overtime.

Fans were on the edge of their seats for 3-on-3 overtime, and the home team did not disappoint as Nathan Billitier netted the game winner at 1:55 of extra time. Sergey Popov and Jason Robertson assisted on Billitier’s fourth of the season.

The Steelheads return home to close out their 3-in-3 tomorrow to host the Sudbury Wolves for a 2PM start.