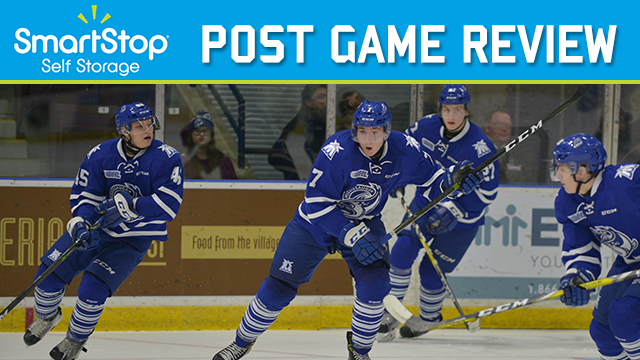 After coming from behind to edge the Barrie Colts 3-2 last night, the Steelheads travelled to Kingston to face off against the Frontenacs. The Steelheads came into tonight’s game riding the high of a seven-game win streak, while the Frontenacs looked to get back in the win column after a 4-3 loss to the Ottawa 67’s on March 4th. The Frontenacs have had the better of the Steelheads this season, winning all of their previous three match-ups by a one-goal differential.

The opening frame was fast paced, as only a few shots were exchanged leading up to the halfway mark of the period (6-3 in favour of the Steelheads). The Fronts were awarded the first power play opportunity of the game at 11:13 as Nic Hague would sit for two on a tripping call. The man-advantage for the home team was shortlived as the Fronts took an unsportsmanlike penalty at 12:38, resulting in 4-on-4 action. The Steelheads had a short power play opportunity after Hague’s penalty expired, but were unable to capitalize as the game returned to even strength. The game remained scoreless after the first 20 minutes of play, with the Steelheads outshooting the Frontenacs 8-7.

The middle frame started similar to the first, with things getting a little more choppy. Jason Robertson solved Mancina to open the scoring at 11:31 of the second from Nathan Dunkley and Same Field. Minutes later, Robertson struck again, capitalizing on a Kingston power play to give the home team a 2-0 lead heading into the final frame. Kingston outshot Mississauga 13-8 in the second.

The Steelheads were able to solve Helvig in the final frame as Nathan Bastian put home his 15th of the season. Linus Nyman restored Kingston’s two-goal lead at 12:50 of the final frame from Robertson, who picked up his third point of the game, and Stephen Desrocher. Down by two with time winding down, the Steelheads pulled Mancina in favour of an extra attacker. They were unable to capitalize with the extra man as Kingston skated away with a 3-1 win, ending the Steelheads’ win streak.

The Steelheads will close out their three-game road trip on Thursday when they visit the Niagara Icedogs. Puck drops at 7PM – catch the action live on Rogers TV cable 10 in Mississauga.