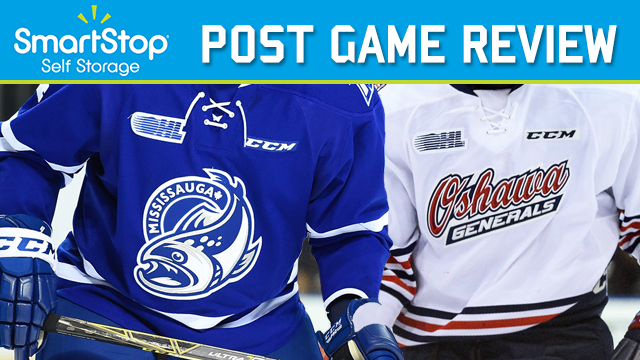 Coming off a 5-2 loss to the Sarnia Sting on Friday, the Mississauga Steelheads looked to close out their weekend road trip on a positive note Sunday evening, and get back in the win column. Mississauga has forced overtime in four of their previous five games, and tonight would be no different as Owen Tippett scored a third period game-tying goal to force five-minute three-on-three action.

Oshawa’s Eric Henderson opened the scoring with his fifth of the season at 9:38 of the first period from Graydon Gottschalk and Anthony Cirelli. The Steelheads managed a number of good opportunities, however Oshawa goaltender, Jeremy Brodeur turned away all 17 shots to preserve the Generals’ 1-0 lead heading into the first intermission.

The Generals struck again just past the midway point of the middle frame as Danil Antropov sniped a shot over Mancina’s shoulder to give Oshawa a 2-0 lead. Sullivan Sparks and Robbie Burt picked up the helpers on Antropov’s second goal of the season. Late in the frame, the Steelheads found some success on the power play as Nicolas Hague fired a shot past Brodeur to get the Trout on the board and cut Oshawa’s lead 2-1. Jacob Moverare and Ryan McLeod assisted on Hague’s eighth of the season. Despite being down by one, the Steelheads held the lead in shots on goal 13-6 in the second period.

The final frame saw a number of good chances at either end before Owen Tippett came out with a huge individual effort at 12:36, going end-to-end, to even the score 2-2. Tippett now leads the league in goals with 13. That goal would be enough send the game to 3-on-3-overtime.

The 3-on-3-overtime period never seems to disappoint, and tonight’s was an exciting few minutes of high-intensity action. Mancina and Brodeur each made a number of key saves, but unfortunately Oshawa’s Medric Mercier would be the overtime hero as the Gens topped the Steelheads by a final score of 3-2.

Mississauga will have a few days off before returning home to host the Erie Otters on Friday, November 4th at 7PM at the Hershey Centre.