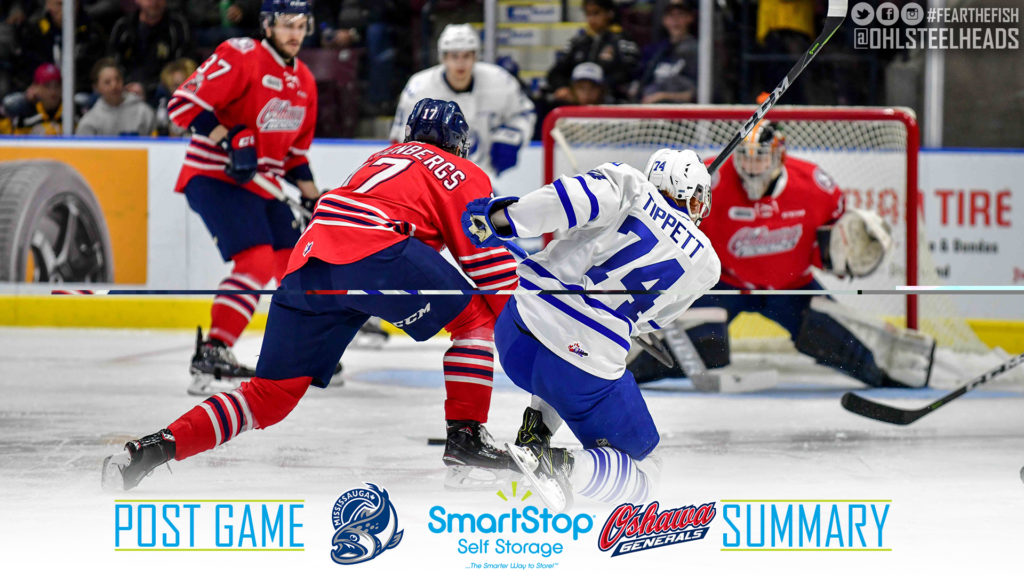 Coming off back-to-back losses, the Steelheads came into Sunday’s game against the Oshawa Generals looking to get back in the win column. These two teams last met just over a week ago on November 17, with the Steelheads doubling up on the Gens 4-2. The Gens came in to today’s game riding the high of a 7-3 win over the Barrie Colts Saturday night that saw them snap a three-game losing streak.

After coming in to relieve Vella last night, Jacob Ingham made the start in goal for the Steelheads. At 7:58 of the opening frame, Oshawa’s Domenico Commisso would be sent off for holding, giving the Steelheads their first power play opportunity of the game. The Generals were successful killing off Commisso’s penalty and the game returned to even strength. Just past the halfway mark of the first, Jack Studnicka buried his eighth of the season from former Steelheads forward Brendan Harrogate and Matt Brassard to give the Gens a 1-0 lead. A few minutes later, the Generals would convert on a power play opportunity as Danil Antropov shoveled one past Ingham at the side of the net to extend Oshawa’s lead 2-0. Kenny Huether and and Commisso assisted on Antropov’s sixth of the season. Cole Ceci was the difference maker in the first, stopping a number of Steelheads’ shots to keep them off the board. The Steelheads outshot the Gens 14-11 in the opening frame, and trailed by two heading into the first intermission.

At 5:44 of the second period, Serron Noel tipped a shot from Ian Blacker past Ingham to extend the Generals’ lead 3-0. The Steelheads continued to press and came close a number of times, but Ceci continued to come up strong for the Gens, keeping Mississauga off the board. Mississauga outshot Oshawa 10-6 in the second period and trailed by three heading into the final frame.

Despite outshooting the Generals to start the period, the Steelheads struggled to convert on any of their opportunities. Ceci continued to make key saves to keep the Steelheads off the board. At 8:05 of the third, Eric Henderson extended Oshawa’s lead 4-0. A minute later, Kenny Huether added a fifth goal as things really started to get out of reach for the Steelheads. At 11:47 the Gens would add a sixth goal from Hayden McCool, resulting in a goaltender change for Mississauga. 6-0 would be the final score as the Steelheads went 0-3 this weekend.

The Steelheads will be on the road again next weekend, starting with a trip to Barrie to take on the Colts Thursday night.