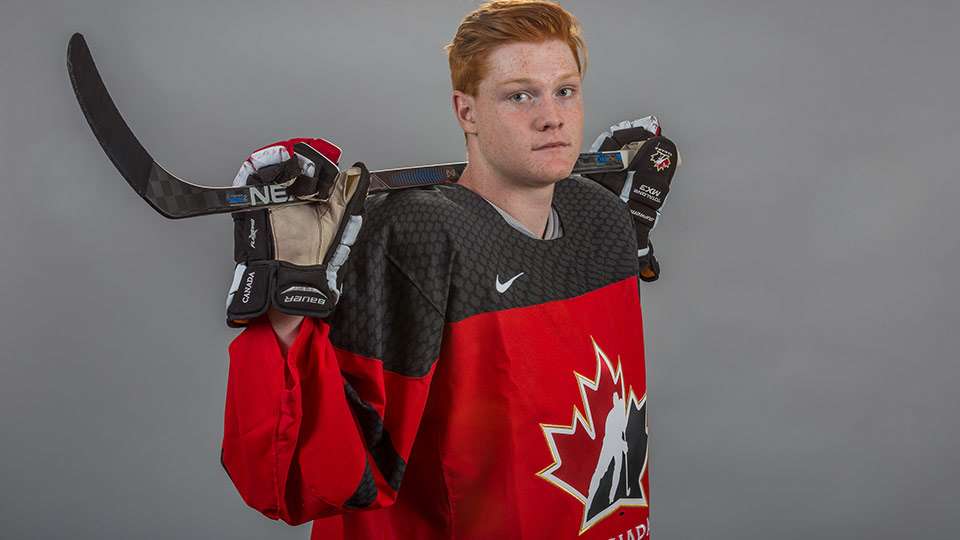 The Great One himself, Wayne Gretzky said it best: “You miss 100 per cent of the shots you don’t take.”

For Owen Tippett, those are words to live by.

And for any hockey fan who has had the chance to watch the 17-year-old play, there haven’t been many shots Tippett hasn’t taken, quickly becoming one of the deadliest goal scorers in the Ontario Hockey League.

“One of my strong points has always been my shooting,” the Peterborough, Ont., native says. “I was always told to shoot the puck, put everything on net, and good things will come.”

His shot – and natural goal-scoring ability – has led Tippett to a place on Canada’s National Men’s Summer Under-18 Team at the 2016 Ivan Hlinka Memorial Cup, although it’s just the latest impressive stop.

During the 2014-15 season, when he captained the Toronto Red Wings (Minor Midget AAA), Tippett scored 52 goals and added 35 assists in just 50 games, numbers good enough to make him the fourth-overall pick by the Mississauga Steelheads in the OHL Priority Selection.

Before that, he chipped in with eight points in six games to help Ontario to a gold medal at the 2015 Canada Winter Games in Prince George, B.C., in his first foray onto the national stage.

And he was a standout at Canada’s national under-17 development camp in Calgary, Alta., last summer, earning a spot on Canada White for the 2015 World Under-17 Hockey Challenge.

It was in Dawson Creek, B.C., where Tippett had his official coming-out party.

After scoring once in a preliminary-round loss to the United States, and once in a quarter-final win over Finland, Tippett broke out offensively in the biggest game of his young career.

Playing in front of a pro-Canadian crowd of more than 4,000 at the Encana Events Centre, and a nation-wide television audience on TSN, Tippett did what he does best: score goals.

He scored the first, second and fifth goals for Canada White, leading it to a 6-2 gold-medal game victory over Russia to help return a Canadian team to the top of the U17 podium for the first time since 2011.

“It was pretty surreal,” Tippett remembers of the performance that clinched his spot on the tournament all-star team. “I wasn’t expecting anything like that going into the game. I wanted to keep my game simple and do everything I could to help bring gold back to Canada. The little things paid off.”

The hat trick caught the eye of Ryan Jankowski, the director of player personnel for Hockey Canada, and the man responsible for Tippett’s place on the U17 and U18 rosters.

“To get the hat trick on that stage, in a gold medal game, speaks volume about his ability to shoot the puck,” Jankowski says. “The way he was clutch in that game led our team to a gold medal, and you always want guys like that.”

In fact, Tippett left such a good impression on the Hockey Canada higher-ups that he was named to Canada’s National Men’s Under-18 Team as an under-ager for the 2016 IIHF U18 World Championship last spring, scoring once in seven games as Canada finished fourth.

Four months later he’s back in the red and white of Team Canada, and ready to chase another gold.

“I just look at it as another opportunity,” he says. “I don’t look at it like I have one step over anyone, but I do embrace the role of being a leader and a go-to goal scorer.”

So the who, what, where and when have been covered, but what about how? Just how has Tippett become one of the best young goal scorers in the country?

“It comes naturally,” he says with a laugh. “I used to practice in my driveway when I was younger, but not a whole lot. I don’t put weights on my stick or anything like that. If there’s anyone who can give me pointers along the way, I’ll listen to them.”

The best is yet to come for Tippett, and for someone who tries to pattern his game after Steven Stamkos and still hasn’t reached his full potential, that’s a scary thought. Especially for opposing goaltenders.

“Owen definitely has a lot of Stamkos’ attributes,” Jankowski says. “When he scores goals they look alike; driving down the wing and shooting the puck. I could see how he would want to be compared to him, and it doesn’t surprise me.

“I think there’s even another step he can reach when he does actually start focusing and working specifically on his shot. It’ll make him even more dangerous.”

So while the Gretzky quote helps drive Tippett, there might be another, this one popularized by Hockey Hall of Fame broadcaster Foster Hewitt, which might best describe his future: