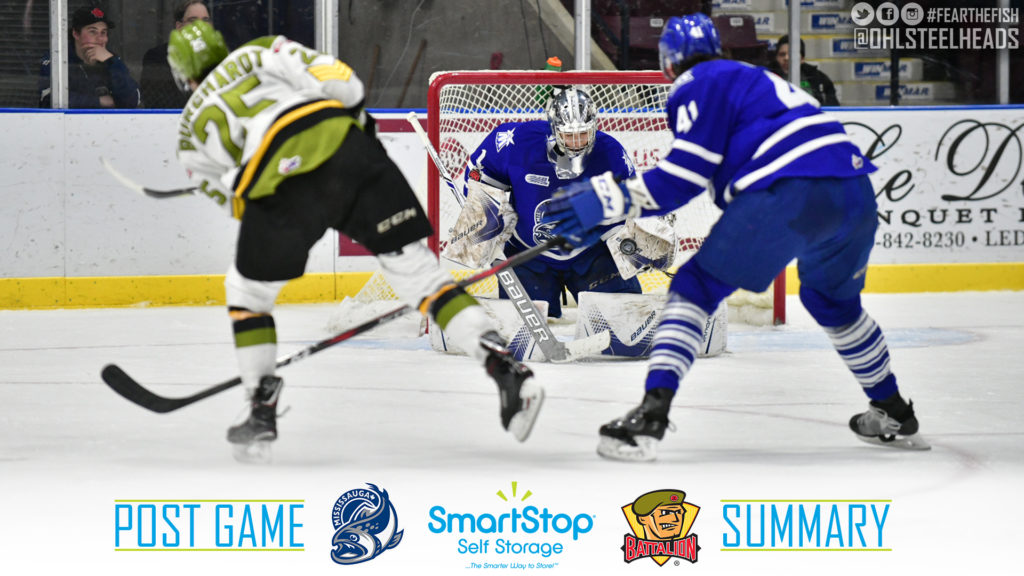 The Mississauga Steelheads played an exciting game in Oshawa Wednesday that, at one point, looked like it could go either way. The Fish suffered a tough loss to the Generals after coming back in the third and were looking for a big win Friday night against North Bay. The Battalion were hoping to end a three-game losing streak during the divisional matchup. Their prayers were answered. The Troops walked away with a 2-1 victory and the Steelheads lost their fifth of six meetings with North Bay this season.

The action began late in the first period, though Mississauga took an early lead in shots on goal. With just under five minutes left, Justin Brazeau charged Mississauga’s net. Jacob Ingham left the crease to make the save and the two collided with Ingham getting the brunt. After taking a few minutes to regroup, he set up in net again and Brazeau went to the penalty box for goalie interference. A minute later, Nic Hague opened the scoring with his 31st of the season. The period ended with the Fish leading 1-0 but the Troops led 14-11 on the shot clock.

The second period, much like the first, picked up at the end. Adam Thilander was caught tripping with six minutes left and gave the Steelheads their second power play of the game. The Fish couldn’t capitalize during North Bay’s penalty kill and the game returned to even strength. Around the same time Nic Hague got the first of the game, Matthew Struthers equalized on a wraparound to get the Troops on the board. A minute later, Adam Thilander found the back of the net and gave his team the lead. For a moment, it seemed the Fish would have another power play goal under their belt after Luke Burghardt was penalized for checking to the head. A shot by Trent Fox seemed to pass the goal line and even had fans cheering, but the referees waved it off and the remaining 20 seconds of play continued. A goal review took place before the teams left their benches but the call on the ice remained. The score was 2-1.

The third period came and went. Ryan McLeod’s late hooking penalty sent the teams to about a minute of four on four and then left the Fish shorthanded afterward. Mississauga was given their fourth power play opportunity with just over four minutes left in regulation when Matthew Struthers harshly collided with Thomas Harley. The Steelheads couldn’t score despite their rapidly climbing shot count and the Battalion’s three-game losing streak came to an end with a 2-1 victory.

The Steelheads are back in action Sunday to face the Erie Otters for their 2 PM Pucks n’ Paws game!