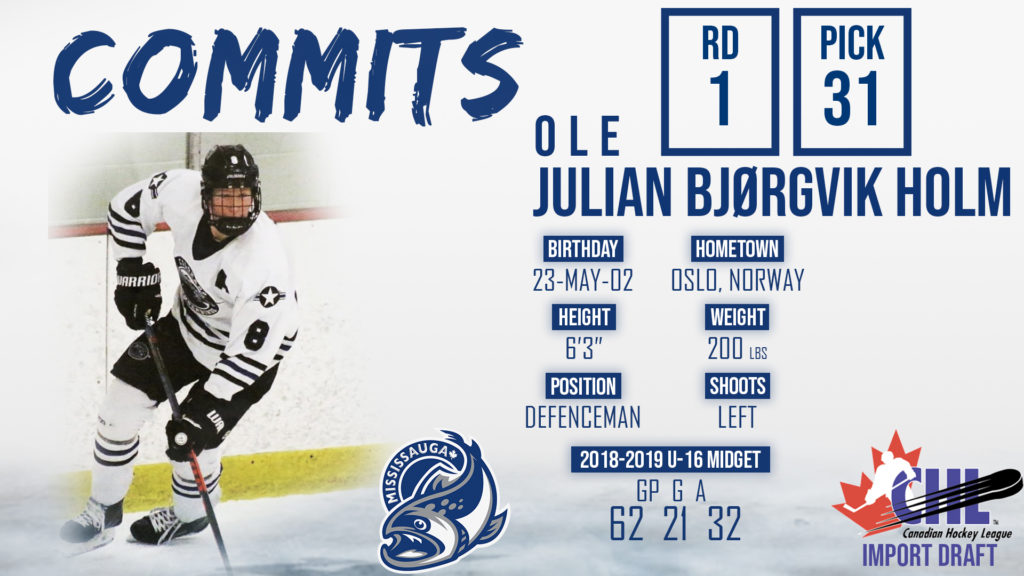 MISSISSAUGA, ON – The Mississauga Steelheads announced today that the hockey club signed their first-round pick (32nd overall) from the 2019 CHL Import Draft, defenceman Ole Julian Bjørgvik Holm.
Holm skated for the Mangerlund Star in Oslo, Norway during the 2017-2018 season. He appeared in 50 games for the U16, U18, and U20 Star teams and netted a total of 6 goals. Holm also tallied 34 assists with the three teams. He was the only 2002 birth year player selected by Tri-City in the Phase II draft.

Last season, Holm played for the Colorado Thunderbirds U-16 Midget team and registered 53 points (21 goals, 32 assists) and a plus 57 rating over 62 games.

The Oslo, Norway native commented when he was drafted in the first-round. “It is amazing. I played in Denver last year and am looking forward to playing for the Steelheads and coming to Mississauga.”

Head Coach and General Manager James Richmond commented on the most recent signing. “We are excited to hear Ole Holm has signed with the Steelheads. Ole is a big (6’3” 200lb.) puck moving defenceman that will be tough to play against. We look forward to seeing Ole in the blue and white this Fall. We would like to welcome Ole and his family to the Steelheads.”

The Steelheads would like to welcome Ole Julian Holm and his family to Mississauga.