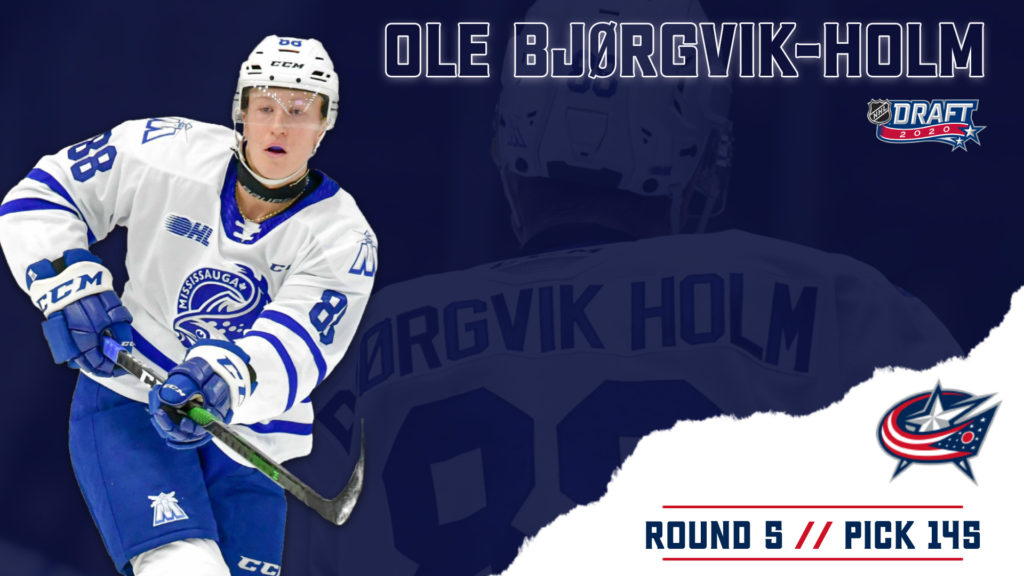 MISSISSAUGA, ON – For the fifth consecutive year, the Mississauga Steelheads had a player chosen in the NHL Entry Draft. On Wednesday afternoon, the Columbus Blue Jackets selected Steelheads import, Ole Bjorgvik-Holm with the 145th overall pick (5th round) in the 2020 NHL Entry Draft.

The first-year 6’3″ defenceman posted 2 goals and 17 assists in 57 OHL games for the Steelheads last season while being paired against some of the league’s top players and was recognized by scouts for his cerebral play and defensive ability.

The Oslo-native was the only Norwegian player to be selected in the 2020 NHL Entry Draft and just the 22nd all-time (7th since 2010).

When asked about what it meant to hear his named called at the virtual draft, a humble Bjorgvik-Holm comments, “It’s a dream come true and I couldn’t be more excited to be a part of the Columbus Blue Jackets Organization. I want to thank my parents, teammates and coaches for helping me get to this point and I’m excited for what the future holds.”

Steelheads General Manager and Head Coach, James Richmond has high-praise for the club’s most recent NHL selection. “Ole has really shown the growth in his on ice performance since he arrived in Mississauga. He’s a big nasty defenceman that will be a solid NHLer one day. We are very happy for Ole and proud to call him a Steelhead! Congratulations to him and his family.”