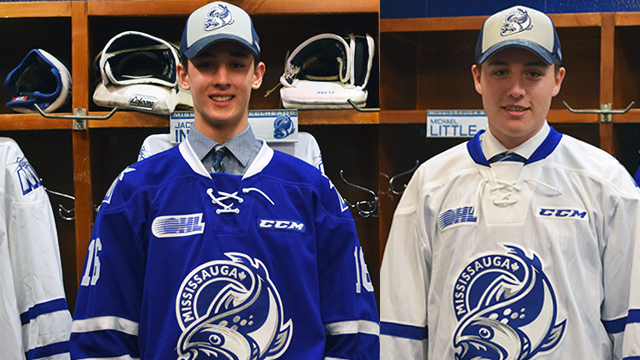 160 players from across Ontario have been given a unique opportunity to catch the attention of National Team scouts, as the rosters for the eight OHL Gold Cup teams were unveiled today. The Mississauga Steelheads will be represented by their second and third round selections from the 2016 OHL Priority Selection, Jacob Ingham (OMHA White) and Michael Little (GTHL Red).

Ingham is excited for the tournament, adding “I am very honoured to have been selected to participate in and compete for the OHL Gold Cup. I believe it’s a great opportunity for me as a goaltender to play with the best players in the OMHA and to play against the best players on the opposing teams. I’m looking forward to an outstanding weekend of hockey!”

Little is also looking forward to the tournament, adding “I am extremely excited to participate in the OHL Gold Cup. I think it’s a great opportunity because you are playing with the best players in the GTHL and playing against the best players from the other leagues across Ontario. To play with guys that you play against all year will be exciting and I can’t wait for this opportunity.”

The tournament will take place from May 4th to May 8th in Kitchener, Ontario.

About the OHL Gold Cup:

The U16 OHL Gold Cup is an annual event created to feature Ontario’s top Under-16 talent. This event not only showcases Ontario’s talent, but it is an evaluation and selection process for Team Canada. The top players from the U16 OHL Gold Cup will attend the Under-17 Team Canada National Camp where the Hockey Canada Staff will select 66 players from across the country to represent Canada at the World Under-17 Challenge held annually in December. With 8 teams and 160 players representing the ALLIANCE, GTHL, HEO, HNO, NOHA, and OMHA, the future of Canadian hockey is on display during the 2016 OHL Gold Cup.