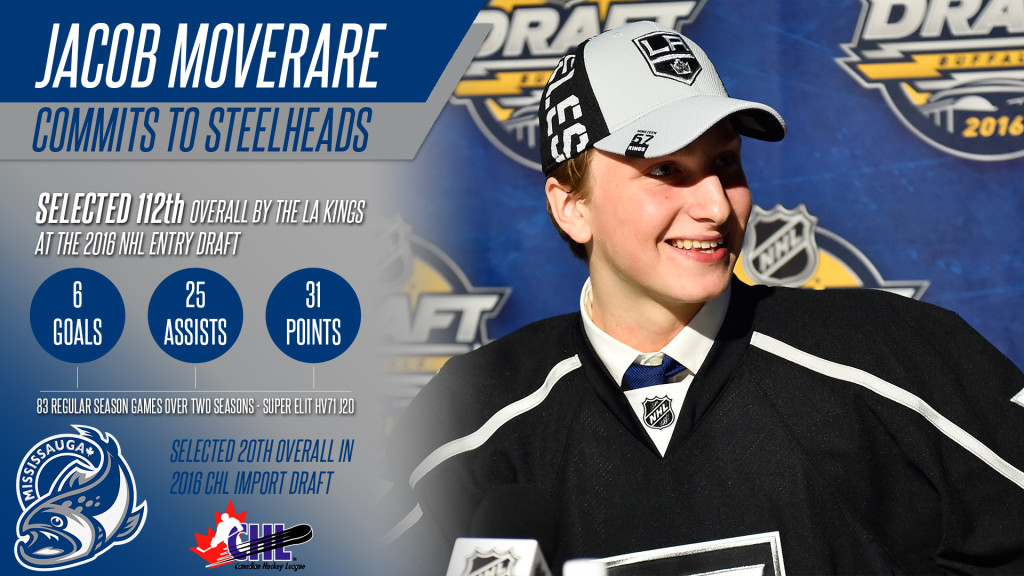 The Mississauga Steelheads are pleased to announce the commitment of the team’s first round 2016 CHL Import Draft selection, Jacob Moverare. The 6”2’, 198-pound Swedish defenceman was taken 20th overall in the CHL Import Draft. Moverare spent his 2015-16 season with the HV71 J-20 team, recording 21 points (five goals, 16 assists) in 41 games played.

To add to his resume, alongside Alexander Nylander, Moverare won silver medals at the 2015 Ivan Hlinka Tournament and at the 2016 World Junior Under-18 Championship; where he recorded five points in seven games. He most recently competed in Plymouth, MI at Sweden’s World Junior Evaluation Camp. In addition to his international experience, Moverare was selected in the fourth round of the 2016 NHL Draft by the Los Angeles Kings, and recently signed a three-year entry level contract with the team.

Steelheads general manager, James Boyd, explains “Jacob is an NHL drafted player with international experience. He is a well-rounded defender with excellent vision and poise with the puck. Jacob’s addition improves the depth of our defence corps for the 2016 – 17 season.”

Steelheads head coach, James Richmond adds “I’m excited to see Jacob on the ice with the Steelheads; and we look forward to Jacob’s arrival and welcome him to the Steelheads family”.

Moverare is expected to join his teammates at Training Camp on August 31st.