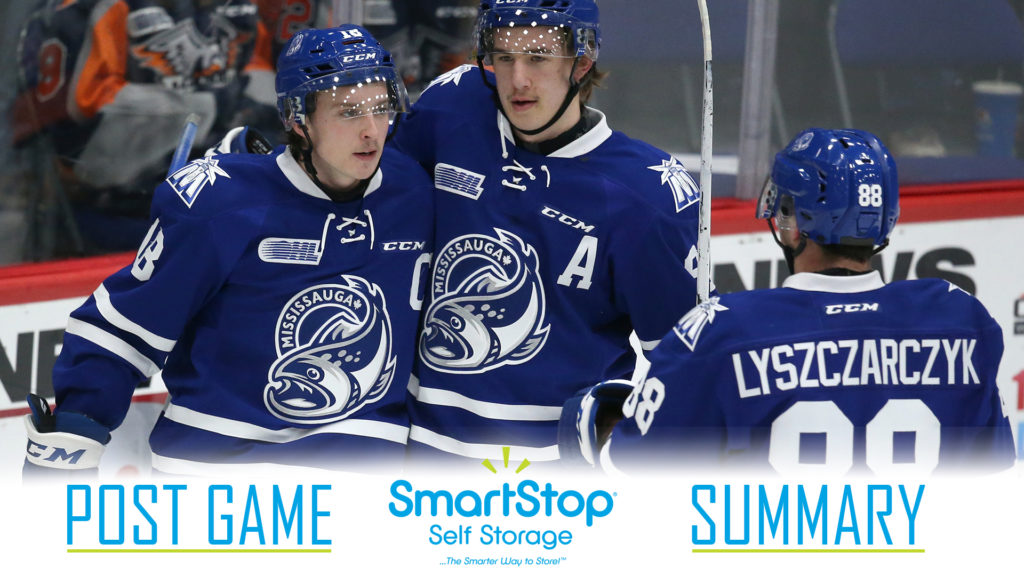 Two of the OHL’s top teams went toe-to-toe tonight as the Steelheads visited the Midwest Division leading London Knights to kick off their first of three games in as many days. Winners of their last nine contests, the 15-4-2-0 Knights were ranked sixth in the CHL this week, while the 14-6-2-0 Steelheads have won their previous four, good for an honourable mention in this week’s CHL rankings.

Following a lengthy pre-game ceremony for Team of the Century Night in London where the Knights saluted their 2005 Memorial Cup Championship team, play finally got underway on the national stage. The Steelheads were quick to take an early lead as Owen Tippett buried the opening goal just 27 seconds into the first period. Lyszczarczyk assisted on Tippett’s 17th of the season, extending his point streak to five games. At 6:06, the Knights responded as Paul Cotter beat Ingham to even the score 1-1. Liam Foudy assisted on Cotter’s first OHL goal. Minutes later, the Knights took the lead as Nathan Dunkley beat Ingham with his eighth of the season to put London up 2-1. Connor McMichael and Alec Regula assisted on the goal. To add insult to injury, less than two minutes later, a tough bounce off Thomas Harley found the back of the Steelheads’ net to put the Knights up 3-1. Boqvist was credited with the goal. In the second half of the frame, penalties would prove costly to the leading Knights. At the 12:00 mark, Alex Formenton was sent off for cross checking, giving the Steelheads an opportunity on the man-advantage. A minute into the power play, Owen Tippett set up Cole Carter who one-timed an easy shot past Joseph Raaymakers. That goal was Carter’s 19th of the season. Later in the frame, Evan Bouchard was booked for slashing, sending the Steelheads back to the power play. 30 seconds into the man-advantage, Lyszczarczyk beat Raaymakers to even the score 3-3. Cole Carter and Ryan McLeod assisted on Lyszczarczyk’s 10th of the season. Late in the frame, the Knights responded with a power play goal of their own as Boqvist restored their lead with his second of the night. Bouchard and Formenton assisted on the goal as the Knights held a 4-3 lead heading into the first intermission.

After seven goals in the opening frame, the pace was a little different in the second with only two goals being scored. The first from Bouchard at 8:43, and the second came just one minute later from Billy Moskal at 9:43. The two Knights’ goals went unanswered and they held a 6-3 lead heading into the final frame.

At the end of the second period, London’s Cole Tymkin was handed a tripping penalty, so the Steelheads started the third on the power play. They weren’t able to capitalize on the man-advantage and the game returned to even strength. At 10:18, Nicholas Canade drew a tripping penalty and the Steelheads would see another opportunity on the man-advantage. Things didn’t go right as 20 seconds into the power play, Formenton scored a shorthanded goal to extend London’s lead to 7-3. Despite the four-goal deficit, the Steelheads continued to battle. At 10:45, William Lochead was sent off for slashing. Taking advantage with the extra man, Ryan McLeod was able to cut the deficit, snapping a beautiful shot top shelf over Raaymakers’ shoulder. Adam Varga assisted on McLeod’s sixth of the season. Minutes later, the Steelheads had another opportunity as the refs awarded Lyszczarczyk a penalty shot after being hauled down on a partial breakaway. Raaymakers stood tall and made the save to keep the score locked at 7-4. That would be it for scoring as the Knights snapped the Steelheads four-game win streak and extended their own to 10-games.

The Steelheads will look to bounce back tomorrow as they host the North Bay Battalion for a 7PM start at the Paramount Fine Foods Centre.