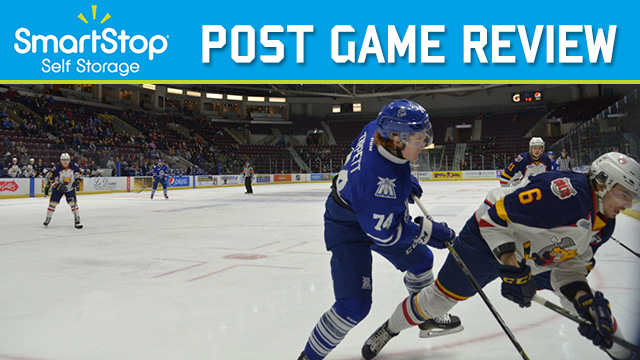 Following a long stretch of road games, the Mississauga Steelheads returned home Friday night to host the Barrie Colts for a central division matchup. The last time these two teams met, Barrie’s Giordano Finoro netted an overtime winner as the Colts edged the Steelheads 3-2. Tonight’s contest would require overtime as well, but this time it would be the Steelheads that came out on top.

The game opened up with two quick goals from the Barrie Colts. The first goal came from Ben Hawerchuck, his eighth of the season at 0.42, assisted by Lucas Chiodo. Zachary Magwood  gave the Colts a two-goal cushion with an unassisted goal at 4:02. Despite an early deficit, Vili Saarijarvi cut the Colts’ lead in half with a snipe from the point. Jacob Moverare and Ryan McLeod picked up the assists on Saarijarvi’s eighth of the season. With twelve minutes left in the period, coincidental slashing penalties saw Mikey McLeod and Ben Hawerchuck both sit for two minutes. The Steelheads were able to even the score at 15:22 of the opening frame as Owen Tippett picked up his 35th goal of the season. The Colts outshot the Steelheads 10-9 as the game sat tied at 2-2 heading into the first intermission.

The second period started off slow before Steelheads’ leading scorer, Owen Tippett notched his second of the night and 36th of the season. Assists on the go-ahead goal came from Nathan Bastian and Nicolas Hague. That would be the lone goal of the middle frame as the Steelheads held a 3-2 lead after 40 minutes of play. The Colts only managed five shots In this frame, while the Steelheads had 16 shots on Colts’ goaltender, Ruan Badenhorst.

Barrie would push this game into overtime as Kirill Nizhnikov scored his seventh of the season from former Steelhead, Jason Smith and Justin Murrary. After a hard fought third period, neither team was able to end the game. The always exciting 3-on-3 overtime certainly did not disappoint. Stefan Leblanc batted a loose puck out of the air past Badenhorst, giving the Steelheads a 4-3 win.

The Steelheads are on the road tomorrow to play Kingston, then are back here at the Hershey Centre on Sunday for their annual Pink the Rink game against the Sudbury Wolves.