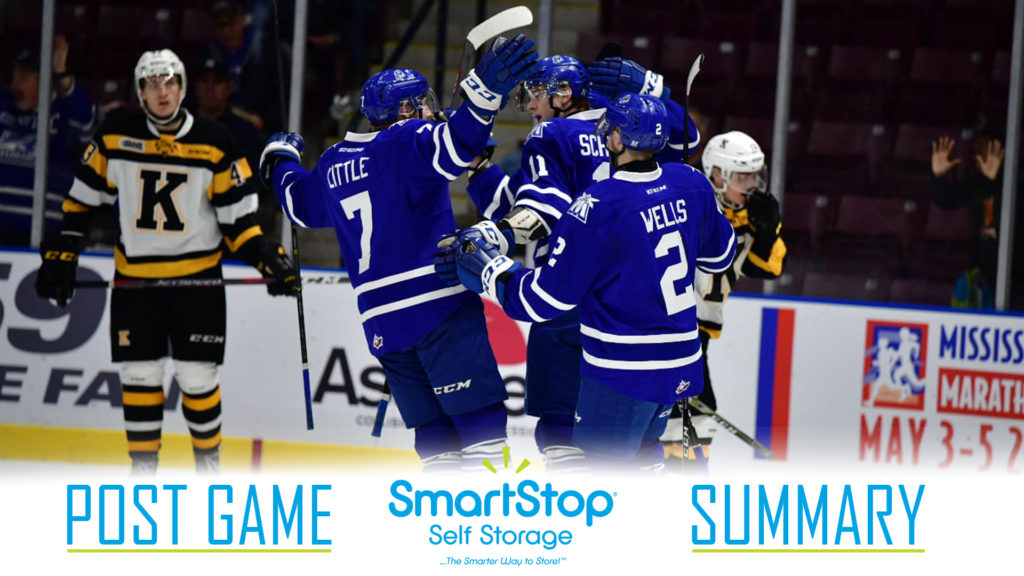 The first period was an exciting one with Michael Little opening the scoring for the Steelheads with his second goal of the season. Keean Washkurak followed up with another goal just over two minutes after, putting the Steelheads up 2-0. After a couple huge saves from Ingham, the Frontenacs finally responded with just over a minute to play in the frame. Zayne Wisdom scored his first goal of the year, cutting the lead in half and kept the Frontenacs in the game going into the second period.

The second frame saw a couple of huge saves from Ingham, but Frontenacs’ goalie and Mississauga native, Brendan Bonello stole the show. The Steelheads had pressure on the Fronts throughout the period, but Bonello shut the door with four incredible saves in the frame. Only until halfway through the period did the Steelheads solve the Frontenacs goalie, when Little scored his second goal of the game and third goal of the season. The Steelheads had a two-goal cushion heading into the final frame.

The Steelheads started the period on the penalty kill, but killed it off and finished the night with a perfect penalty kill. As the period ensued, so did the roughness. After a cross check on Thomas Harley, a scrum followed behind the net, sending the Steelheads to the power play. After a big hit on Owen Tippett, Michael Little came to his teammate’s defence. Little and his dance partner received game misconducts for fighting and Tippett received a 10 minute misconduct. The Steelheads held down the fort following the chaos, and with the help of Cole Carter’s empty net goal, beat the Frontenacs 4-1.

Keean Washkurak continued to stay hot, and added a goal and assist on Sunday, bringing him to 7 points on the season, leading the Steelheads. Jacob Ingham had a great game, allowing 1 goal on 30 shots, helping improve the Steelheads to a 2-1-1-0 record.

The Steelheads are back in action on Thursday, October 4th when they visit the Barrie Colts before returning home on Friday, October 5th to host the Niagara IceDogs. Tickets can be purchased online through Ticketmaster here.