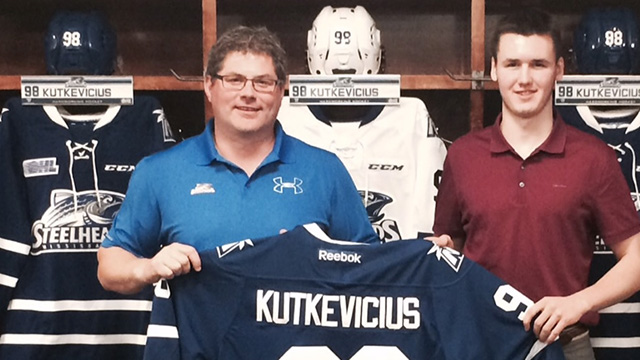 MISSISSAUGA, ON – The Mississauga Steelheads are pleased to announce the commitment of the team’s second pick in the 2014 OHL Priority Selection, Luke Kutkevicius, to an OHL Standard Player Agreement with the organization.

The 25th overall selection at the 2014 OHL Priority Selection spent the 2014-15 season playing for the OJHL’s North York Rangers, tallying 12 points in 44 games. The 6’ 1” forward added four points in six games in a 1st Round Playoff defeat at the hands of the Toronto Jr. Canadiens.

“Luke is a fast and skilled player. He has shown a knack for elevating his game at key times over the past two seasons and we’re thrilled to have him join the organization” said head coach & general manager James Boyd.

Kutkevicius added “I’m excited to take the next step in my hockey career, entering my NHL Draft year. I’m ready to get on the ice and get to work”