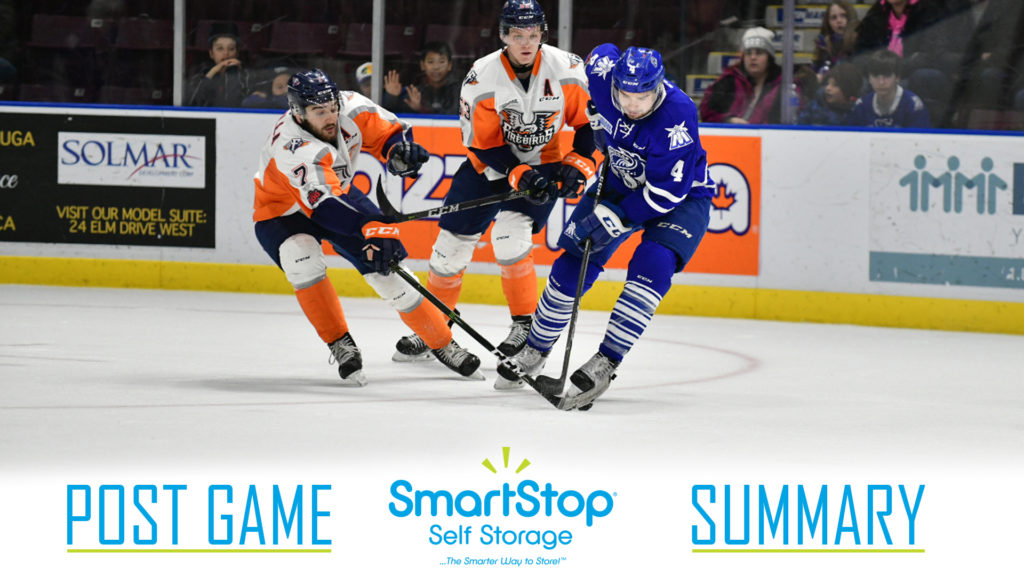 Looking to bounce back after a 5-1 loss to the Saginaw Spirit Friday night, the Mississauga Steelheads were back in action Saturday to take on the Flint Firebirds. With only two wins this season, the Firebirds were looking to extend their win streak to three games following last night’s 4-2 win over the Soo Greyhounds.

The Firebirds notched the opening goal at 6:54 as Jake Durham beat Joe Ranger to give the home team a 1-0 lead. Vladislav Kolyachonok and Hunter Holmes assisted on Durham’s 10th of the season. The Steelheads outshot the Firebirds 17-10 in the opening frame, but were unable to find the back of the net as the score remained 1-0 for the home team.

Things started to heat up in the second period with six goals being scored. Cole Carter evened the score 1-1 at 5:56, capitalizing on a power play to get the Steelheads on the board. Alan Lyszczarczyk and Ryan McLeod assisted on Carter’s 17th of the season. Less than a minute later, Flint’s Fedor Gordeev restored the Firebirds’ lead with his first of the season. At 8:30, Ty Dellandrea beat Ranger to put the Firebirds up 3-1. Hunter Holmes and Jake Durham assisted on Dellandrea’s eighth of the year. At 9:14, Steelheads’ forward Richard Whittaker brought the Steelheads back within one with his fourth of the season. Thomas Harley assisted on the goal. At the halfway mark of the game, the Steelheads evened things up again as Owen Tippett beat Emanuel Vella on a breakaway, bringing the score to 3-3. Again, the Firebirds were quick to respond as C.J. Clarke fired a shot over Ranger’s left shoulder to restore Flint’s lead. That would do it for Ranger as Jacob Ingham then entered the game to relieve him. The Steelheads outshot the Firebirds 12-8 in the second and trailed by one heading into the final frame.

Penalty trouble proved costly to the Firebirds in the final frame as Alan Lyszczarczyk scored two unanswered power play goals to propel the Steelheads to a 5-4 win. The first came at 6:50 of the third and was unassisted. With the score even 4-4 and the Steelheads pressing as the clock ran down, Flint’s Eric Uba got called for interference, giving the Steelheads a late opportunity on the man-advantage. Lyszczarczyk found the back of the net again at 19:15 to give the Steelheads their first lead of the night. Cole Carter and Thomas Harley assisted on the eventual game winner. Lyszczarczyk had four points on the night (two goals, two assists), while Steelheads defenceman, Thomas Harley added three assists in the contest.

The Steelheads are back in action on Wednesday afternoon to host the Guelph Storm for their first School Day Game of the season.