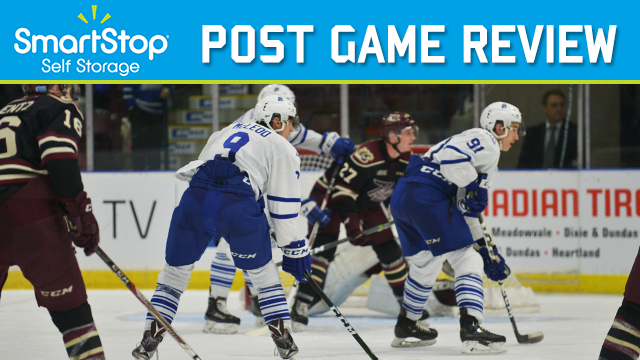 With game two set for tonight in Peterborough, the Steelheads looked to stay hot on the road and head back home with a 2-0 series lead. The Steelheads handed the Petes their first loss of the postseason on Thursday, winning 5-3 in Peterborough. Matthew Mancina made the start in net again against his former team, while Dylan Wells stood between the pipes for the Petes.

Things got off to a physical start with each team trading penalties. The Petes had three powerplay opportunities and the Steelheads had two in the opening frame, but neither team were able to capitalize on the man-advantage as the game remained scoreless heading into the first intermission. The Steelheads outshot the Petes 13-9.

Jacob Moverare opened the scoring in the middle frame, getting the Steelheads on the board with his first postseason goal. Vili Saarijarvi and Nathan Bastian picked up the assists as the Steelheads took a 1-0 lead. Past the halfway mark of the frame, Owen Tippett added some cushion with his sixth of the playoffs from Trent Fox and Bastian. The Steelheads would head to the dressing room up by 2 at the end of 40.

The Petes came out in the third desperate to cut the deficit and as a result, tempers started to flare. Christopher Paquette was handed a five-minute major and game misconduct, while Alex Black and Zach Gallant received misconducts for throwing equipment. The Steelheads were unable to capitalize on the ensuing powerplays, but Spencer Watson sealed a 3-0 win with a late empty net goal.

The Steelheads will head home with a 2-0 series lead. Game 3 is set for Monday, April 24 at the Hershey Centre, puck drops at 7PM.