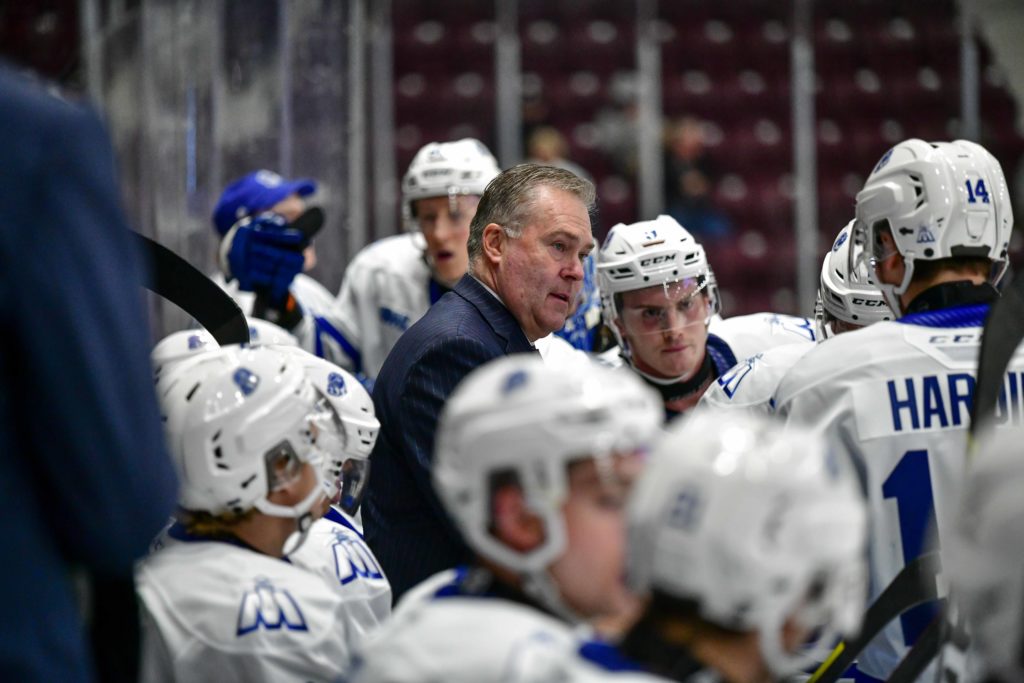 For Mississauga Steelheads Head Coach and General Manager, James Richmond, hockey is part of his soul.

Richmond grew up with six brothers and sisters playing on their backyard hockey rink in Rexdale. His love for the game led to a playing career in both North America and Europe until he hung up the skates in Cambridge, Ontario at the age of 42.

Following his retirement on the ice, Richmond decided to take a run at coaching, using his experience in the game to help develop young players. He was given the opportunity to coach the Georgetown Raiders for five years before becoming the Head Coach and General Manager for the Aurora Tigers of the Ontario Junior Hockey league (OJHL) in 2010.

“It was a perfect fit for my family” Richmond said about joining the Tigers in 2010. “It was local; that’s right near where my family and I live.”

While coaching the Aurora Tigers, Richmond was asked to interview for an opportunity with an NHL team. Michael Futa, who back then was working for the Los Angeles Kings, had known Richmond for quite some time and asked him to fly out to California to interview for a job on their player development team.

“I remember being in Florida with my family and getting a call from Futa,” Richmond said. “I flew home, then flew out to Los Angeles the next day. Had the interview, and they hired me.”

Richmond was then coaching the Aurora Tigers and working with the Kings simultaneously, flying to the States a couple of times a month to work with players on both the Kings and their AHL affiliate at the time, the Manchester Monarchs.

One of the players Richmond got to work and build a connection with that still lasts to this day is current Montreal Canadiens and former Los Angeles Kings forward Tyler Toffoli.

“James is a great skater and a great teacher; he really helped my skating a lot,” Toffoli said about working with Richmond. “He didn’t come in and try to change the way I skate; he just showed me little tips and tricks that can still make a big difference.”

“I still skate with James in the summer when I can and do the drills he has shown me when I train by myself. He gave me so much confidence that really helped me get to where I am today.”

After five years with the Aurora Tigers and winning OJHL coach of the year twice, Richmond was given a chance to go coach in the OHL as an assistant with the Mississauga Steelheads.

“I had talked with different teams about opportunities around the OHL; Mississauga just made sense. A great owner who cares about his employees, and I wouldn’t have to move my family.”

After one year as an assistant coach during the 2015-16 season, Richmond was promoted to General Manager and Head Coach of the Mississauga Steelheads. However, with the added responsibility in Mississauga, he had to step away from the Los Angeles Kings.

“I travelled a lot in my time with hockey. Now having this job with the Steelheads and that commitment level, I thought it was time for me to be at home and with my family more often.” Richmond said about his decision to leave his role on the development team with the Kings.

In his first season as head coach, he led the Steelheads to a 34-21-13 record and made it to the OHL finals, where they lost a best-of-seven series to the Erie Otters in five games. As Richmond remembers, it was a very successful first year as head coach, but one that also required lots of perseverance.

“On December 4th, I believe we were last in the league, but we kept working on the systems and dug our way out and into a playoff spot in the second half of the season. That was a special group of players we had; they never gave up.”

Currently, James Richmond is both the General Manager and Head Coach of the Mississauga Steelheads. He prides himself on being someone his players can trust to help them reach their full potential.

“In junior hockey, you have to be a coach that focuses on development. These are young players who all have dreams of playing professional hockey, and I want nothing more than to help them reach that dream.”

After four years, Richmond currently has a record of 126-111-28 as head coach and since joining the Steelheads, has seen fourteen players drafted into the NHL. He stays in touch with many of them, always making sure to congratulate them on their most significant accomplishments, such as their first NHL game or first NHL goal.