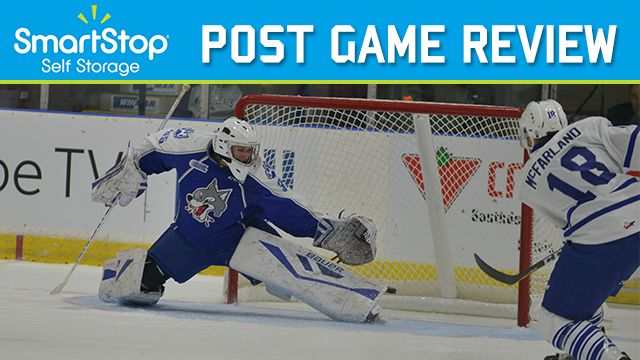 The Mississauga Steelheads hosted the Sudbury Wolves Sunday afternoon, looking to bounce back from a disappointing start to the 2016-17 regular season. Although they were still short-staffed with players away at NHL camps, Mississauga took control right off the hop, looking poised in comparison to Friday’s game. Michael Little set the table early in the first, notching his first career OHL goal to give the Steelheads a 1-0 lead. Stefan LeBlanc and Ryan McLeod picked up the assists on the opening goal. Close to the halfway mark of the first, Sudbury’s Michael Pezzetta received a five-minute major and was ejected from the game following a check-to-the-head. The Steelheads held a 1-0 lead heading into the first intermission.

Mississauga was awarded a power play early in the middle frame as Ben Garagan would head to the box to serve two minutes for hooking. Aidan McFarland capitalized on the man-advantage, scoring his first of three goals to give the Steelheads a 2-0 lead. Ryan McLeod and Stefan LeBlanc each picked up their second assists of the night on the power play marker. Minutes later, Nicolas Hague added an insurance marker, firing a shot past Zack Bowman to extend Mississauga’s lead 3-0. Scoley Dow had the lone assist on the goal. Not slowing down, Owen Tippett picked up his first of the regular season from Ryan McLeod and Stefan LeBlanc, their third assists of the night, to put Mississauga up 4-0. Reagan O’Grady would get Sudbury on the board at 11:59 of the second.

The Steelheads entered the final frame up 4-1 and showed no signs of slowing down. McFarland put home his second power play goal of the night from Nicolas Hague and Owen Tippett early in the third to extend their lead 5-1. Late in the frame, McFarland completed the hat-trick, sealing a 6-1 home win for the Steelheads. Goaltender, Matthew Mancina turned away 24 of 25 shots he faced, while Aidan McFarland (3G), Stefan LeBlanc (3A) and Ryan McLeod (3A) earned first, second and third star honours respectively.

The Steelheads have a few days off before hosting the Windsor Spitfires Friday, September 30th at 7PM at the Hershey Centre.