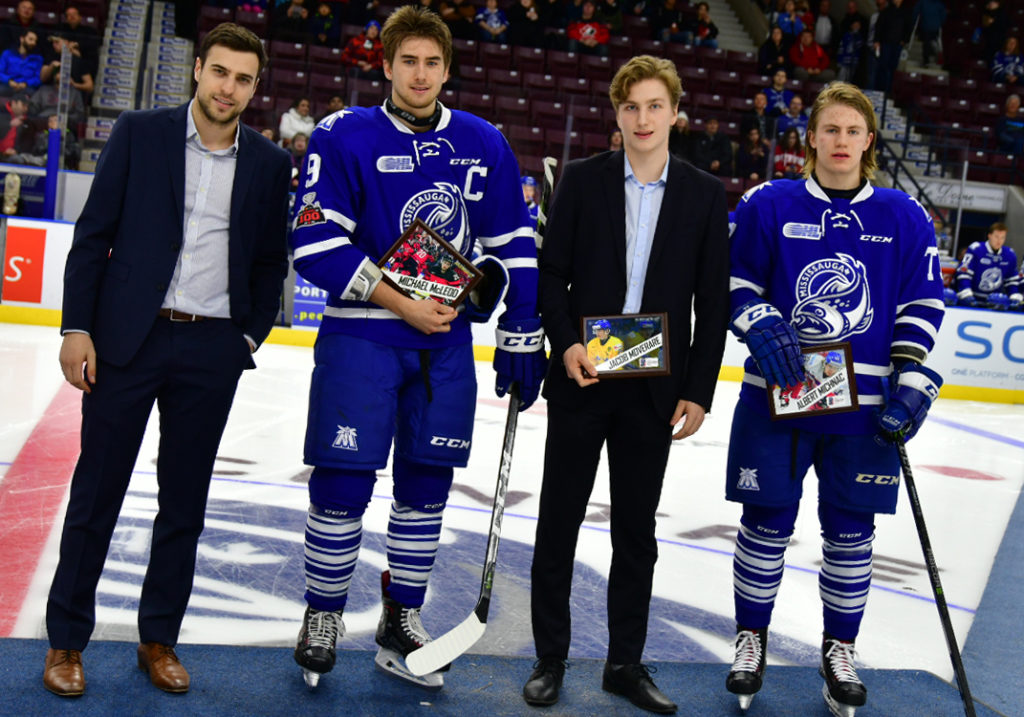 On December 26th, the 2018 IIHF World Junior Championship kicked off in Buffalo, New York. The Mississauga Steelheads were well represented at the tournament, with three different players representing three different countries. On January 19th, Michael McLeod of Canada, Jacob Moverare of Sweden and Albert Michnac of the Czech Republic returned to the Hershey Centre and were presented with plaques ahead of the Steelheads home game against the Barrie Colts. Captain of the Steelheads, Michael McLeod, was part of the gold medal winning squad, and was on the ice when Tyler Steenbergen scored the game winning goal.

“I just remember going wild and [so was everyone] on the bench,” he says. “No one could stop celebrating and then we were trying to calm down at the same time. When we got the empty net goal and then we knew we kind of had it.”

The game winner came late in the third, with 1:40 remaining in the period. Canada would score an empty net goal 25 seconds later to seal their win. McLeod said it was another amazing experience, having won silver with Canada last year in Montreal.

First-time World Juniors player Jacob Moverare won a silver medal with Sweden. McLeod and Moverare faced off against each other in the gold medal final, which was a “funny experience,” as Moverare put it. It was different seeing his Steelheads captain on the opposing bench. Moverare was an alternate captain for Sweden, as he is for Mississauga as well. His leadership style is to make players feel comfortable and welcomed, whether he’s with his country at the international level or with the Steelheads.

Albert Michnac, who represented the Czech Republic and finished fourth at the tournament, says it was an honour and a joy representing his country, but also found it odd facing off against his Steelheads teammates.

“It was kind of weird seeing them in different jerseys,” Michnac, who racked up three points in the tournament, says. “But I really enjoyed it and they played really well.”

As they make a push toward the playoffs here in Mississauga, all three players will look to incorporate something different from the lessons they learned on the world stage.

“Experience under pressure and when the tension is high,” says McLeod, adding that games like the gold medal final help keep your composure when an important win is on the line.

Albert Michnac says trusting the system of your team is what can lead to wins and alluded to the Czech’s high-ranking finish at the World Juniors. The pace can be different at the international level, and that is what Moverare looks to bring to the team as the Steelheads stride toward a playoff berth.