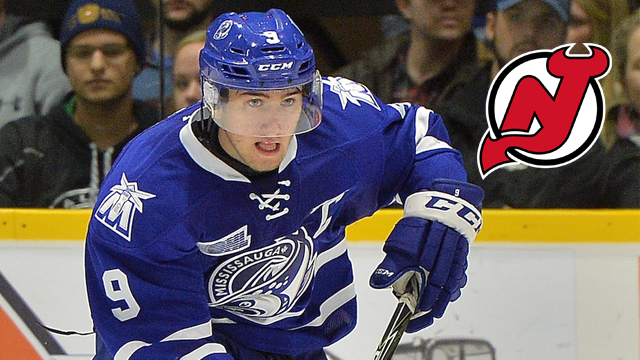 The New Jersey Devils announced Wednesday that they’ve returned 2016 first round (12th overall) pick Michael McLeod to the Mississauga Steelheads for the 2017-18 season.

The 19-year-old who won a silver medal with Canada’s National Junior Team in January underwent successful arthroscopic surgery for a torn meniscus in his left knee, suffered during a pre-season game on September 25th against the New York Islanders.

The #NJDevils have activated F Michael McLeod off IR. In addition, the club has assigned McLeod to Mississauga (OHL).

NJD have placed D Mirco Mueller (broken left clavicle suffered 11/12/17 at Chicago) on IR, retroactive to 11/12/17. Mueller will be having surgery on Thursday.

McLeod rejoins a Steelheads club fresh off a 5-4 win over the Erie Otters on Wednesday that saw recently returned Florida Panthers prospect Owen Tippett‘s first goal of the season stand as the game winner. The Steelheads have won seven of their past 10 games and sit third in the Central Division with an overall record of 9-10-0-1.

McLeod helped lead the Steelheads to their first Eastern Conference title last spring, putting the Trout in the OHL Championship Series for the first time with 11 goals, 16 assists and 27 points in 20 playoff contests.

Mississauga’s captain, the hometown product had 73 points (27-46–73) in 57 games last season and was the Steelheads’ first round (5th overall) pick in the 2014 OHL Priority Selection.

Mississauga’s next action comes at home to the Oshawa Generals on Friday night.