McLeod, Tippett & Watson each score 2 in 6-4 win over IceDogs 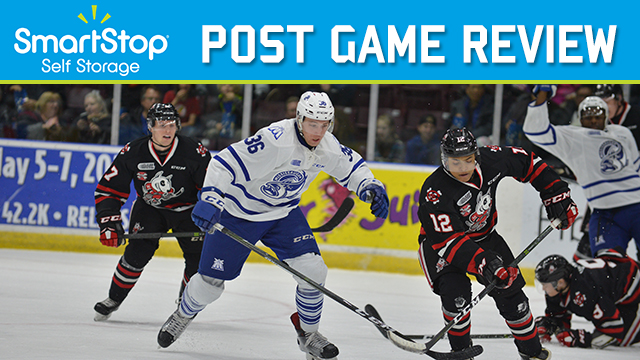 After picking up two wins at home over the weekend, the Steelheads travelled down the QEW for a central division matchup against the Niagara IceDogs Thursday night. Mississauga has dominated the regular season series, winning all three of these two team’s previous meetings. Although the IceDogs battled back from a three-goal deficit, tonight would be no different as the Steelheads came out on top in a 6-4 final.

It was all Mississauga in the opening frame as the Steelheads controlled the pace of the game, capitalizing early and often. Owen Tippett would strike first one-timing a cross-crease pass from Michael McLeod. Jacob Moverare picked up the secondary assist on Tippett’s 37th goal of the season. Later in the frame, Spencer Watson would extend the Steelheads’ lead, firing a wrist shot over Stephen Dhillon’s blocker-side shoulder. Ryan McLeod and Vili Saarijarvi assisted on Watson’s 15th of the season. Just under a minute later, the Steelheads would capitalize on the power play as captain, Michael McLeod gave the Steelheads a comfortable three-goal cushion after rushing the net and finishing off a perfect feed from defenceman, Jacob Moverare. The Steelheads outshot the IceDogs 18-14 and held a 3-0 lead after the first period of play.

The IceDogs responded with back-to-back goals in the first half of the middle frame, from Oliver Castleman and Ben Jones, to cut Mississauga’s lead 3-2. Just past the halfway mark of the frame, Jacob Moverare fired a shot from the point that was stopped by Dhillon, but Michael McLeod was right on the doorstep and fired home the rebound to restore a two-goal lead for the Steelheads. The IceDogs were able to pull back within one as Akil Thomas fired a shot through a crowd that beat Mancina. Shots on goal in the second were 17-9 in favour of the Steelheads, as Mississauga held a 4-3 lead heading into the final frame.

Spencer Watson continued his hot-streak against the IceDogs, netting his second of the night and sixth against Niagara this season, to put the Steelheads up 5-3 at 5:07 of the third. Nic Hague and Vili Saarijarvi picked up the assists on Watson’s 16th of the season. The IceDogs were not giving up easy tonight as they came back within one at 13:18 off a goal from Johnny Corneil. In the final minutes, the IceDogs pulled Dhillon in favour of an extra-attacker, opening the door for Owen Tippett to score his second of the night, an empty-netter, and seal a 6-4 victory for Mississauga.

The Steelheads return home to the Hershey Centre tomorrow to host the North Bay Battalion for a 7PM start.