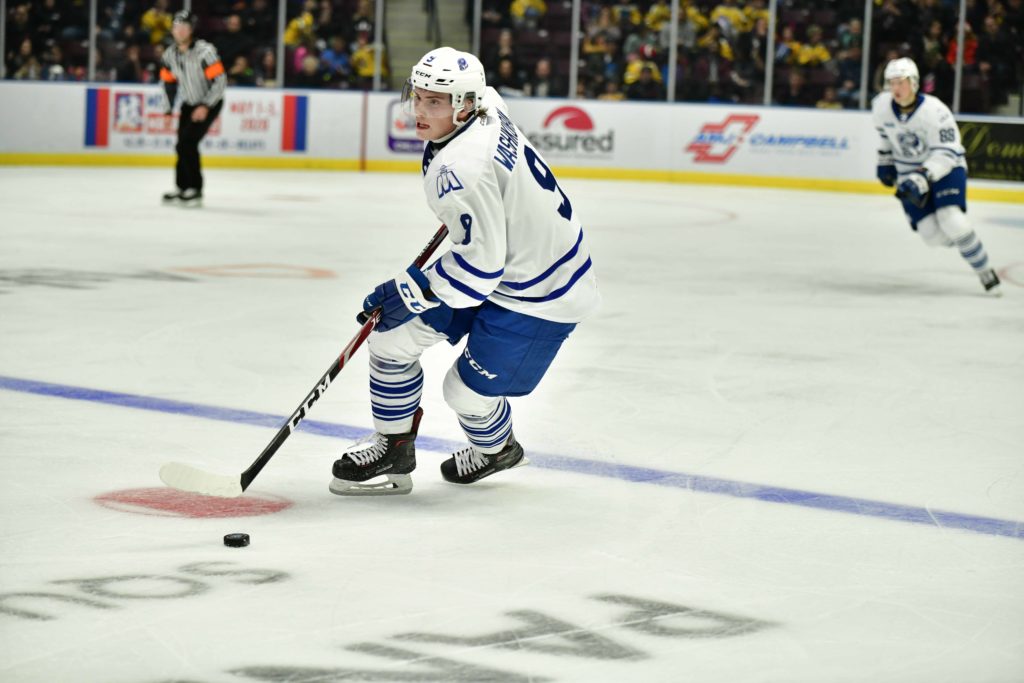 Mississauga, ON – The Mississauga Steelheads will travel south of the border this weekend to take on the Flint Firebirds and Saginaw Spirit.

The Fish are coming off a weekend split, falling to the Hamilton Bulldogs but beating the Niagara IceDogs, both by a score of 4-2. Nick Isaacson had an impressive weekend, where he recorded 5 points (4G, 1A) including a hat-trick against the IceDogs to help secure the win. Kai Edmonds started both games in goal, stopping an impressive 65/70 shots on goal (.928 SV%).

Thomas Harley will represent the Steelheads for Team OHL at the CIBC Canada Russia Series on Thursday night, before returning to the lineup to take on the Firebirds and Spirit this weekend. The game can be watched on Sportsnet ONE at 7:00 PM ET. Ethan Del Mastro remains away from the team at the World U-17 Hockey Challenge, where Team Canada Black will play Russia in the quarterfinals on Thursday night. Del Mastro has helped his team to an undefeated start in the tournament with a 3-0 record.

NOVEMBER 8 at FLNT (7:00 PM)
The Flint Firebirds (10-5-0-0) are off to a great start to the season, sitting third in the Western Conference. The Firebirds are looking to bounce back after dropping two straight games to the Sarnia Sting and Barrie Colts. The team is led by forwards Ty Dellandrea (7G, 10A) and Evgeniy Oksentyuk (7G, 11A), and goaltender Anthony Popovich (10GP, .903 SV%).

MATCHUP
The Steelheads won both games against the Firebirds during the 2018-19 season. Richard Whittaker impressed in the series, recording 3 points (1G, 2A), while Joe Ranger played in both games registering 35 saves.

The teams will matchup one other time this season, at the Paramount Fine Foods Centre on February 21st.

The Steelheads hold an all-time record of 5-3-0-0 against the Flint Firebirds.

NOVEMBER 9 at SAG (7:05 PM)
The Saginaw Spirit (9-6-1-1) are led by forward Cole Perfetti (5G, 24A), who was recently ranked as a “Player to Watch” by NHL Central Scouting for the 2020 NHL Draft. Saturday nights game will mark the end of a 5-game (1-1-0-1) home stand for the Spirit, with the most recent game against the Guelph Storm being postponed due to ice conditions.

The Steelheads play Saginaw twice during the 2018-19 season, dropping both games.

Saturday nights game will mark the first time Aidan Prueter and Duncan Penman will play against their former team, after being acquired by the Fish in January 2019.

Mississauga and Saginaw will play one more time this season, on March 5th at 11:00 AM for the Steelheads second School Day game of the season.

The Steelheads will return home for two games the following weekend, on November 15th against the Sarnia Sting and November 17th against the Erie Otters. Tickets to the games can be purchased by visiting the Box Office, online through ticketmaster.ca or by calling 905-502-9100.